AccroGeist, a new synthpop duo from Manchester, England, appeared on my radar the way many other artists do: They sent me an email and a link to a private Soundcloud page, where I could listen to their new EP, Something to Repair Me (released December 23, 2016 and available on iTunes, Spotify, Deezer, Apple Music and CDBaby). I get several of these requests a day, and try to give a listen to all of them. I select the best to appear on the Modern Synthpop Facebook page.

Occasionally, I receive links to music that blows me away, with extraordinary arrangements, production and polish. That was the case with AccroGeist – the four songs on its new EP feature excellent arrangements, plenty of cool synth touches and engaging vocals. So of course I had to reach out to Pascal Carton and Mike Waring to learn more: 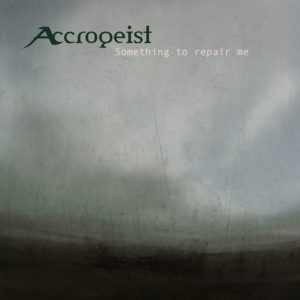 Chuck Frey: First, I want to say that I’m very impressed with your debut LP, Something to Repair Me. The songwriting and arrangements show a lot of polish and style. How did AccroGeist come to be?

Pascal Carton: Thank you! I was looking for something fresh, something new. I always had plenty of ideas and a distinctive style. I knew I needed to find someone similarly minded so I registered onto a musicians’ forum with the intention to form a writing partnership with another electronic songwriter/producer. Seeing that 99 per cent of those registered were musicians looking to join guitar-based indie bands, Mike and I naturally gravitated to each other.

Chuck: At what point did the two of you say, “Holy shit. We’ve got something exciting here. We need to write music together!”

Pas: We kicked off with “Deadhead,” the first track we worked on. Things began to fall into place really quickly. I think it massively helps when you’re both coming from the same place musically. In our first conversation we quizzed each other’s knowledge on synths, plugins and everything Depeche Mode.

Chuck: What does your band name mean and where did it come from? Were you going for a Germanic-sounding name?

Mike Waring: It’s a combination of french and german. It references a few different ideas. Pas has french and german family so it’s a personal reference. At the same time, we both have a strong sense of being european especially considering the way we’re influenced by german synth pop. It could mean “ghost addict” though it’s really completely open to interpretation.

Chuck: You describe your music as filling “a void, a sound somewhere between early 80’s synth pop and the lighter elements of the EBM goth scene and Futurepop: caught between the decades, difficult to categorise, definitely evocative.” Please tell me more about the sound and style you’re pursuing as AccroGeist. 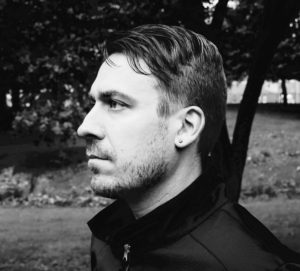 Pas: I think our mastering engineer summed it up pretty well. He told us our music reminded him of all the great synth pop bands yet sounds totally new. He felt he was hearing synth pads from the 80s, bass arpeggiation from the 90s all wrapped up in a futuristic package.

Chuck: Your description of the new EP is a study in opposites. You describe it as “a satisfying blend of pop and gothic. Cold icy atmospheres give way to uplifting choruses; a journey through unchartered territories to the occasional echo from the past.” It sounds like the line between light and dark is an exciting place in which to create music. Is that right?

Mike: We do tend to tread that path! We like to get the balance right (cheeky Depeche Mode reference there!) We like having strong contrasts and surprising people. No-one expects “Watch You Burn” to explode like it does.

Chuck: What artists have influenced the evolution of your music?

Pas: Have we mentioned Depeche Mode?! We’ve got a real awarenesss of the bands that laid the foundations for electronic music like Fad Gadget and early Human League. I attribute the spikier side of our sound to them. Of course, we have some current favourites like VNV Nation, Mesh, Apoptygma Berserk and IAMX.

Chuck: How do you create and nurture songs to life? Do you have a certain songwriting process, or is it more seat of the pants?

Pas: Ideas come thick and fast. The ideas phase is by far my favourite part of the process. I’ll quickly get together a verse and chorus structure even laying down demo vocals. My whole set-up is built around working quickly and efficiently, when inspiration strikes and creative juices flow, I know I won’t be slowed down and lose the spark. The whole process continues when we’re both in the studio. We’ll then pull apart the fibres of the song, analysing each element in excruciating detail!

Mike: I get really excited whenever Pas brings in a new song. I don’t want him to get big-headed (so don’t read this, Pas!) though I have to say he’s a genius songwriter. A lot of the work we do in the studio is about building a structure around the song to show it off as the sparkling diamond it is. We want people to go on a journey when they listen to our music.

Chuck: How did you manage to link up with legendary Producer Stephen Hague (Pet Shop Boys, New Order, Erasure)? In what ways did he influence the development of the four songs on this LP?

Pas: If you don’t ask you don’t get! It was quite a targeted approach. Obviously we knew the work he’d done before and felt someone of his calibre and experience would handle our tracks with care. We wanted to maintain the dynamics within the tracks and knew that he’d understand where we were coming from. It was also pretty cool to hear his stories from back in the day. After all, he’s worked with some of the greatest bands in electronic music.

Chuck: How has the electronic music scene in Manchester in particular, and the UK in general, influenced the development of your music?

Pas: The music scene in Manchester is of course legendary however I feel these things are cyclical. Right now, we love the sounds coming out of Germany and Scandinavia. In Sweden, for instance, they’ve always had a knack of producing perfect pop and they love their synths. In Germany it’s not a shock when the top ten is dominated by synth pop bands (and David Hasselhoff!!)

Chuck: You mentioned in your bio that AccroGeist is “developing a passionate and excitable fanbase.” Where are the early hot spots, and how have you promoted your music so far?

Mike: We’re lucky to have a great following on social media. They’ve stuck with us through the early days when we only had demos out there. They obviously like what they’ve heard and we’re really pleased that now we have the EP out everyone can get to hear what we’ve been up to.

Chuck: What’s next for AccroGeist?

Pas: We’ve got the EP being released on Friday 23rd December. It’s going to be available on Cdbaby.com and then rolled out to iTunes, Spotify and other popular streaming sites throughout January 2017. We’re currently finalising plans for a video to accompany the EP. It’s a really interesting idea and we think it’ll capture people’s imagination. On top of that, we’ve got a few surprises up our sleeve including plans for a remix by one of our favourite artists and a limited edition physical release. We expecting to have our first album out autumn 2017.

Chuck: Do you have any plans to tour?

Pas: We plan to begin live performance mid-2017 as part of a lead-up to our first album later in the year.

Chuck: In closing, I wish you much success with your music!