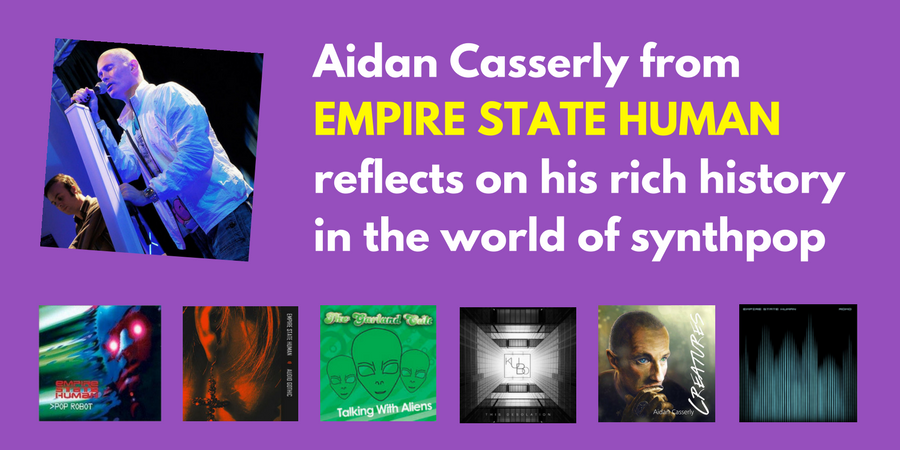 On June 1, Empire State Human will launch its new album, Romo. Aidan Casserly, ESH’s creative genius, has been around the synthpop scene for 18 years producing memorable music via a variety of projects – Empire State Human, KuBO, the Garland Cult and a solid body of solo work. He is arguably one of the most prolific artists in the modern synthpop scene.

I recently had an opportunity to talk to Aidan about his long and varied career in the synthpop scene, his new ESH album and what’s next. 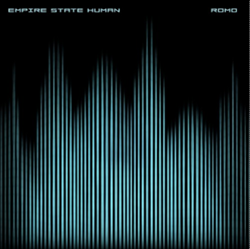 Chuck Frey: Romo will be your 22nd release in 18 years. What makes you so prolific? Where does the fire come from that has kept you going all these years?

Aidan Casserly: The last ESH album was The Dark, which was released in 2014. I felt that was the final album to be honest, and I announced that it was soon after its release. It was the 20th release and it was a closing themed album. The finality was very clear for me, to see and feel. Basically, there were no plans, no more writing or focus on ESH at that time.

Then, in early 2016, I noticed quite a lot of activity and interest coming through the ESH facebook page, downloads were up and our videos were getting lots of plays. It appeared there was an appetite for the more synth pop sounds again. Minimal wave had up until last year, been the main synth genre. But now I noticed more synthpop bands and labels and more importantly new synthpop releases.

All this wasn’t lost on me, and the seeds were slowly sown, on the possibility of some new ESH music. I wrote a number of new tracks, instrumental ones, and added them to a new mix of a Christmas song we’d recorded previous. I then approached an upcoming UK based synth/dance/pop label called Banoffeesound, and they seemed interested in a CD/Digital EP release, which was eventually released in December 2016.

Keeping prolific and maintaining creativity, is a frame of mind for me. I see myself as an artist, so I create something every day of my life. That could be a lyric, a poem, a mix, a song or a piece of music. Last year I had 6 solo Aidan Casserly releases out, and this year it will be even more.

Frey: What are your thoughts on the state of the synthpop scene today? How is it evolved over the last two decades?

Casserly: I feel it’s the healthiest, more focused and more evolving then it’s ever been. Many great new and existing bands, record labels, singers and songwriters. It really excites and motivates me further now. I think we’re at the start of a major shift towards synthpop again. Similar to the early 2000s.

In 2002, ESH signed to Ninthwave Records, and through the Electroclash scene, our debut album Pop Robot is now listed in the top 100 Electroclash albums of all time. This lead us to hitting #1 in the US iTunes dance charts in 2003, and eventually lead us to working with ex Kraftwerk original member Wolfgang Flur on our Audio Gothic album. I really believe the last two decades have supported synthpop, and given it room to grow and develop, through people like you Chuck and labels and bands too, who have continued to create, at times when the musical world was against them.

Frey: How has the Empire State Human sound evolved over the last two decades?

Casserly: ESH have had a number of lineup changes since forming in 1999. I’ve been the consistent and original founder member. I guess I’m the creative force and motivator for ESH. I’m happy and proud of that. There may have been times when continuing seemed very hard and very difficult and pointless. The major development for ESH was when Sean Barron joined. Sean and I wrote and produced three brilliant albums together – Urbanism, Cycles and Audio Gothic. After that, Sean desired a new direction and new goals and these he achieved with iEuropean. Check out the iEuropean debut just released, it’s amazing.

Frey: You’ve had a number of side projects, such as The Garland Cult, and some solo work. How has that influenced the evolution of the ESH sound?

Casserly: I’ve been lucky that opportunities to write and release new music have always presented themselves. My solo Aidan Casserly output has been phenomenal in volume and diversity. I’m so proud of that kind of catalog. I’ve recently composed the original motion picture soundtrack to the horror The Amityville Legacy, which was as rewarding and it was challenging. The Garland Cult released three albums, in two years. No plans to reform that project, but you can never say never. Doing all these albums has of course had an influence and help me as a songwriter and producer, which has helped evolve ESH has a potent pop band.

Frey: What was your goal in writing Romo? Is there a theme to the album?

Casserly: The first goal was to create an electronic pop orientated, more uptempo, well produced and consistent album. It’s about outsiders, night people / walkers and the future. I set the album in the near future, songs like Automation, Future Sex and The Invisible are examples of that. Recently a dear friend, Caesar Gervess directed a truly beautiful video for the song Into Grey, from Romo. You should check it out on YouTube.

Romo was actually a short lived musical movement from the early 90s in the UK. It was a mix of indie and new wave and synthpop. Whilst our Romo album isn’t part of the Romo movement, I loved that name, the four letters approach seemed to work aesthetically speaking, in terms of a new album title. I was so proud that the label ScentAir Records immediately expressed an interest in releasing this new album on CD and Digital. It’s released June 1st, and it’s something that excites and pleases me greatly.

Frey: You’ve mentioned in other interviews that your music always represents a snapshot in time of your life, your thoughts, your influences. Who or what influenced the songwriting process for the songs on Romo?

Casserly: Yes, it’s still the same for me now. Producing a new album, is the biggest challenge and most rewarding experience for any artist or band. For me, I must be 100% clear in my own mind, on what I want the album to represent, as a stand alone piece. Songwriting wise, there’s always a clear and distinct difference to working as ESH, to working on my solo career, or my work with KuBO (along with Brian O’Malley) or indeed Ferrochrome (a new project with Dirk Krause of Armadeddon Dildos). For ESH, I write from the outside in and for my solo music it’s from the inside out. The song titles and content are very specific for ESH. I can’t think of another synthpop band, which has a similar vision regarding song titles or content as ESH.

Frey: I see you plan to re-release your 2005 album, Urbanism, this summer. Why that album? Will it include any new material?

Casserly: Well, the particular album was never released physically, just digitally. That was a major disappointment to me at the time and still is now. In January 2017, I re-released a Deluxe Edition of my first solo album White Soul, with four brand new songs as bonus material. I recently had the idea of doing something similar for Urbanism.

To make it authentic and more of a unique release, I also chatted with Sean Barron (it was the first album Sean worked on when he was originally part of ESH) to see if he’d like to be part of this process, and be a creative partner on it also. The original album has a number of different producers working on it, such artists/producers as Tycho Brahe, Wave In Head, John Giacobello, nocomment, as well as ESH. Sean and I felt a deluxe edition, would be amazing if we reunited the production team from that period of ESH and produced a new mix as well as write new songs together for the bonus part.

This process has begun, and Sean has uploaded a video of a new mix of one of the best Urbanism tracks, We Are Industry. We begun writing some new tracks as well. There is label interest, for a short limited edition CD run. We’ll see where this all goes. It’s very exciting and rewarding working with Sean on this deluxe edition. I’ve always felt, he was the best producer I had ever worked with, and I still believe that today.

Frey: I was reading an interview that you did with the Grave Concerns music blog in 2011 where you talked about being a stage manager at a classic music venue. Is that still your daytime gig? Does classic music still influence your sound?

Casserly: Yes, I still work in stage management, at a venue here in Dublin. I’m lucky, I can be surrounded by music in my private life and my working life. It’s a rare treat to have such music surround me, as these classical composers, do influence me. I admire their beauty and try to take notice of how it works and how it makes me feel emotionally, in the hope it will make me a better composer myself.

Frey: What’s next for Empire State Human after Romo?

Casserly: Well, the new album Romo is released June 1st on ScentAir Records. Then there’s the Deluxe Edition of Urbanism to complete and see released on CD. The great artist and musician Philippe Laurent designed the cover Romo, and also created brand new artwork for Urbanism. Philippe is another wonderful friend and creative, who I’ve been so lucky to have met.

Frey: Is there anything else you’d like to say to Modern Synthpop fans around the world?

Casserly: The main thing to say is, please continue to support the bands, the record labels by purchasing their albums. If you truly love synthpop, then avoid illegal download sites. Synthpop is a genre, attached to a small scene. It may be getting popular again, but it will sink and die if fans don’t buy the product.

On behalf of Empire State Human and ScentAir Records, if you want to support us and buy Romo, when it’s released on June 1st, then we salute you. I’ve put the whole album up on my House Of Analogue Soundcloud page, so feel free to listen and enjoy. Either way, help keep synthpop alive, and if there’s a live synth band playing your city, then go out and attend. But mainly, keep on loving this beautiful music.