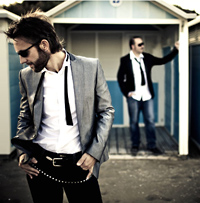 During the past few weeks, I’ve had an opportunity to preview Babylonia’s new album, Motel la Solitude. During the next few days, I will post my review of this awesome new work from the talented Italian synthpop duo.

Meanwhile, here is an interview I recently did with Max from Babylonia:

Chuck Frey: What were your goals for Motel la Solitude?

Max: We have tried to move forward from the previous album “Later Tonight” in terms of experimenting. We wanted a harder and more organic album and we think we did it.

CF: What does the name of the album signify?

Max: A motel is a place where people stay for just a night or a little more. A place of transition and meditation as well, but also a place of rest and break. We think that somehow this is the mood of the new album. In addiction to that, we find the words “Motel La Solitude” very poetic and elegant.

CF: What is the official release date?

Max: Motel La Solitude will be out on 15th january 2010 on CD and digital formats.

CF: What are you and Robbie proudest of on this album? What excites you about it?

Max: To be honest, we are really proud of every part of the album : we love the production, most of the songs (melodies and lyrics), the artwork itself. We worked hard for this new record, so it’s a great satisfaction for us.

CF: How does this new album reflect an evolution of the Babylonia musical style?

Max: At the beginning of the recording sessions of Motel La Solitude we felt that we didn’t wanted another dance/club oriented album as Later Tonight. We keep on listening new music and discovering new artists and genres, so somehow this reflects on our work. We have grown as persons as well as musicians and probably, thanks to this, new album sounds more articulated and rich.

CF: What made you decide to work with sound engineer Marco Barusso? What did he help you to achieve on Motel la Solitude?

Max: We knew what Marco did with bands like Lacuna Coil, Cradle Of Filth and other great names. So we were lucky to work with him. He was fundamental in studio because he helped us in giving a cooler energy to the tracks, especially on the drums.

CF: Four years between albums – do you consider yourselves to be perfectionists when you’re writing and producing songs?

Max: Oh yes! We release a new work only when we are very proud and feel secure about it.

CF: What were your sources of inspiration while writing and producing Motel la Solitude?

Max: Personal life and an uncertain amount of records we listened to during these years.

CF: Do you feel that you’ve grown in confidence as songwriters and performers? How so?

Max: Yes we do! We had the chance to perform in many European cities like Paris, Berlin, Frankfurt, Praga, Bratislava and more. Moreover, we opened the concerts of many talented artists like IAMX, Clients and Melotron : watching all these acts at work from a very close perspective was very instructive. All these experiences helped us in feeling more confident on stage, so nowadays our concerts are more enjoyable and rich than before!

CF: You mention in your publicity materials that you have refined your sound in part through your experiences of playing live shows throughout Europe. What are some of the things you learned, and how have they influence the direction of your music?

Max: Playing new songs in front of an audience can help you in perceiving your songs in a different way. For example, you can realize that a song needs a different structure as the old one doesn’t work at all. Also, playing live new material from “Motel La Solitude” pushed us in searching a sound more powerful and strong, because you want to see people dancing and moving during your shows.

CF: You also indicate that Motel la Solitude appeals not only to fans of synthpop music, but also anyone who loves a good pop song. Did you write the songs on this album with the goal of appealing to a much broader audience?

Max: We don’t have any expectation or goal during the writing but we find new songs potentially enjoyable to a larger audience.

CF: Where will you be touring to promote Motel la Solitude? Any plans to come to the States?

Max: We are currently building up a promotional tour that will start on 20th february 2010 in Istanbul. Then we will play 6-7 shows throughout Italy. We will constantly update out websites with news dates and further infos. We’d love to play in the States, it would be a dream!  We hope someday to have the chance to come and play there!

CF: What else would you like to say to the readers of the Modern Synthpop blog?

Max: We invite them to discover our music through our websites (www.babyloniamusic.com and www.myspace.com/babylonia) and we hope to meet them to one of our next concerts. Keep on supporting synthpop music! Thanks for your kindness and ciao from Italy!

Watch for my review of Motel la Solitude on this blog!