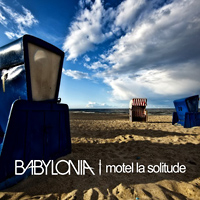 The pleasures of this delightful album are best appreciated with a good pair of headphones. The production on Motel la Solitude is first rate, with the group’s lush arrangements rarely if ever sounding muddy or over-produced. A new addition to the Babylonia sound on this album is guitar, which is perfectly integrated into the group’s rich instrumental tapestry on several songs, and adds an exciting new dimension to the group’s already-distinctive style.

A Feeling Without Feeling: The first song on Motel la Solitude starts out with a stark, lonely synth line, followed by Max’s expressive vocals. Against this spartan backdrop, the song slowly builds into a delectable, multifaceted mid-tempo number punctuated by a soaring synthsizer riff.

On The Corner: An ominous sounding mid-tempo song that is one of my favorites. After a 30-second synthesizer intro, the lead guitar is paired with drums to establish a strong, driving beat for this excellent song. As usual, Max’s plaintive vocals reinforce the ominous tone of On the Corner: “Something waits around the corner/I don’t want to discover/What stands around the corner/I’m trembling.” A very cool song!

By My Side: A great selection for the first single from Motel la Solitude. This song has a very lush sound and a strong beat. I love the way Babylonia uses different instruments and vocals to set up a point-counterpoint, with synth and guitar playfully swirling around in my headphones.

Better Days: An excellent ballad, underscored by a soaring synthesizer line that reflects the lyrics’ hopeful tone:  “We just can’t seen to find a way/So I can pray for better days.”

Ethereal Connection: Another well-crafted, lush mid-tempo song. One of its highlights is a beautiful instrumental interlude about 1:40 into this excellent song that serves as its bridge.

Myself Into Myself: This song features many playful touches and contrasts in it’s lush arrangement that gives it a DM-esque sound.

Requiem For Me: A sparse but blissful ballad that features a great point-counterpoint between Max’s heavenly vocals and atmospheric synth lines. Pure ear candy!

Soundtrack for an End: This excellent song features propulsive vocals, underscored by a playful beat underscored by jangly synths. At the end of the song, there is a very cool interlude with what sounds like a synthesized slide guitar. Heavenly!

Love Not For Me: A soaring, multi-layered violin intro slowly reaches a crescendo, then transitions into a propulsive beat with synth accents that sounds very reminiscent of recent Depeche Mode songs. Lots of playful noises and synthesizer riffs swirl around Max’s distinctive vocals, making this a real stand-out track, in my opinion.

Although it’s too early in 2010 to proclaim Babylonia’s new release as the best album of the new year, it’s certainly in first place on my playlist right now!

You can listen to excerpts of four songs on Babylonia’s MySpace page. Motel la Solitude will be released on January 15, 2010.