Paradise, the new single released today by Breakdown Valentine, represents a new direction for the San Francisco-based duo. Until now, their style could best be described as synth-rock. But now, vocalist Olivia Barchard and producer/songwriter Allen Davis are exploring a more synthesizer-driven sound, with neo-disco influences.

I recently caught up with Allen and Olivia to learn more:

Chuck Frey: Allen, you’ve been around the SF music scene for quite a few years. What is one of the pivotal events in your music career that influenced where you are today?

Allen Davis: Getting signed to v2 records with Every Move a Picture was pivotal in changing my perception of what success in the music industry at the time was, and diametrically it also provided me with opportunities and experiences that never would have been possible otherwise. Co-producing that record gave me the confidence to move forward with mixing and engineering this and other projects I’ve been involved in.

Frey: How about you, Olivia?

Olivia Barchard: I would have to say a performance of ours at The Independent in San Francisco was pivotal for me in that I experienced a pure breakthrough during that show. And I’ll never forget the energy of a packed house at Bottom of the Hill a couple years back. It’s an amazing feeling to share your music and connect with others in that way. Music is a universal language in itself and I want to continue to create and connect through it. 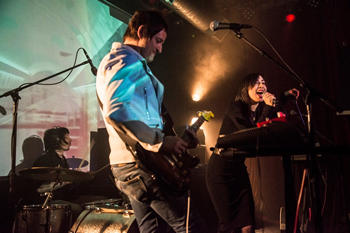 Frey: How would the two of you characterize your musical influences?

Allen: Some the earliest albums I owned were Radioactivity, Oxygene, Candy-O, and a lot of old Tangerine Dream soundtracks. My parents also listened to a lot of orchestral 50s music…a good example might be Riptide by the Righteous Brothers.

Olivia: I grew up listening to a lot of The Beatles, David Bowie, and 80s Pop music. In my college years I started broadening my spectrum and began listening to all different genres and bands like Oasis to Devo. Every artist I have enjoyed listening to has influenced me in one way or another but the artistry of David Bowie has struck me the most.

Frey: It sounds like Breakdown Valentine started with some long distance song writing, according to your bio. What convinced the two of you that you needed to keep going with this project?

Olivia: We wrote one song long distance.. a song that never made it onto our first EP actually… But based off that song, we both knew there was more to explore, so on a whim I went up to Portland to record and write with Allen for 3 days. The whole process felt fluid and we were excited about the music we had created in those 72 hours, so we decided to move forward.

Allen: Our song writing process hasn’t really changed much since the beginning. I’ll sketch out something on some synths or guitar and then Olivia will put vocals on it, which almost always results in a rethinking of the piece and where it should go. The melodies she comes up with determine if the idea is going to be pursued further.

Frey: What’s in your repertoire of synthesizers?

Frey: Breakdown Valentine is a very cool name for a band. Where did you come up with it?

Allen: If I remember correctly I was going through some Ric Ocasek lyrics… I can’t remember the exact song but the words were in there, just not put together. I liked that it could be construed different ways.

Olivia: Yes, Allen came to me with the name one day and l loved how beautiful yet tragic it sounded. It sounded good and was visually appealing in typography as well.

Frey: You’ve been on hiatus during the last year. What made you decide to take a break from BV? What have you done during that time?

Olivia: We hadn’t taken a break from BV necessarily, we were writing and playing with new ideas while Allen was diving into production working with other artists…

Allen: I’ve been producing some and playing in some other projects, but mainly I was having a hard time figuring out what was next for BV. We wrote a whole other EP which was shelved, which continued in a more synth rock vein but my enthusiasm for it at the time just wasn’t there. It wasn’t until writing Paradise that I felt that enthusiasm return…

Olivia: I think we both wanted a different direction for this second EP. I was really listening to a lot of Kraftwerk and Giorgio Moroder at the time, so Allen’s initial sketch of Paradise really inspired and excited me. I laid down some vocals on the track and we took a different turn… During this process we chose not to play out live in order to have time and space to experiment and write, so it probably seemed like we fell off the face of the Earth. We kind of did! But we came back from outer space with some new sounds.

Frey: You say the new EP “will be a collection of synth-driven songs, incorporating cinematic instrumentals.” How is this an evolution of the brilliantly executed guitar/synth/vocals and driving rhythms formula that has characterized your work so far? BTW, what will the new EP be called?

Olivia: Our new collection of songs is meant to play out as a conceptual body of work, even though they are marked out as songs… It’s one big vision versus multiple themes like our first EP… You won’t hear the same instrumentation but we don’t veer away from who we are as a sound. Allen is still producing and mixing it all, it’ll very much sound like us…

Allen: Yes, this record has a concept driven narrative. It was fun to write songs that all relate to each other thematically and sonically… I’ve always wanted to do a record that meant more as a whole than its parts. Also, I had been playing a lot of guitar in another project during the last couple of years and felt that on this record, concentrating on more synths and their arrangement dynamically seemed more inspiring… And while there are some bits of software synths on there, most of the sounds are from analog/hardware synths, which makes you write differently than starting ‘in the box’. I still have some mixing to do before the EP is done. A couple songs still need to be tweaked.

Olivia: The second EP is still yet to be titled.

Frey: It sounds like Breakdown Valentine is highly regarded in San Francisco and the Bay Area. What other pockets of fans have you gained around the world?

Olivia: According to Soundcloud, we have a lot of listeners in Canada and Brazil. We also have quite a bit of followers from Mexico.

Frey: Do you plan to tour in support of the new EP?

Olivia: We will play shows in the Bay Area. Touring would be great if we had tour support!

Frey: What’s next for Breakdown Valentine?

Allen: I can’t begin to think about our next record until this one is finished… Although I did stumble across one of the songs off the unreleased EP and thought “that’s actually better than I remember.”

Olivia: Finishing up and releasing our 2nd EP is our focus. We’d like to play some shows in support of the release and continue creating… we’ve been collaborating with a Bay Area artist, Anna Lorraine Cueva, on artwork for our music so we’d like to continue collaborating with artists and exploring visual media as well… And maybe I should take a listen to that shelved EP of ours…