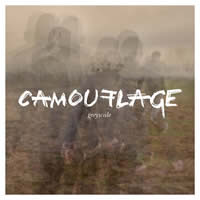 Greyscale, the new album from German synthpop legend Camouflage, blends melancholy and hope into a rich, beautiful tapestry. It reflects the best of the group’s signature sound while also updating it and giving it a contemporary spin.

Considering the gestation period of this album (it’s been almost 9 years since Relocated was released), Greyscale doesn’t have the sound of an overly-fussed-over, sterile album that got tweaked one too many times. Rather, it displays a subtle beauty that shows a group that’s at top of its game. It’s the closest thing to a masterpiece I’ve listened to in quite some time. There’s no filler here.

Once again responsible for the production of this album is Heiko Maile. Stylistically confident, he contrasts electronic elements, guitars, sonic experimentation and beats with acoustic instruments, such as the string ensemble of the Babelsberg Film Orchestra.

The Camouflage listener is always rewarded by repeated listenings of each new album. That was the case with Sensor and Relocated – excellent albums in their own right – and it’s just as true with Greyscale. Each successive listen reveals new details and textures, making it a thrill to discover its treasures.

Shine is the first track on Greyscale and the single that was released in advance of the album. It’s an excellent one, a fine piece of ear candy that gets into your head and continues playing there for hours after you’ve listened to it.

Laughing features quirky synths and nice use of acoustic guitar. Together with the lead synth, they provide a nice musical counterpoint to Marcus Meyn’s staccato vocals.

In the Cloud is a brooding downtempo song with a sparse but rich arrangement. It tells the story of someone who is so busy thinking about heaven – “in the clouds” – that they have lost touch with who they are. This is a very cool, atmospheric song that’s as fine as anything Camouflage has ever produced.

Count on Me is a duet with Peter Heppner of Wolfsheim. The song itself is a declaration of unconditional love. It’s not one of my favorites, however. Heppner’s voice just doesn’t seem to fit the arrangement, and I found his nasal voice to be a distraction on this otherwise decent track.

Greyscale is an instrumental that has a powerful cinematic feel. The beginning of the song features a flute solo over a sparse electronic beat. The arrangement quickly builds, adding several more layers of synths and an electric guitar. It gave me the feeling of looking out over a desolate, grey landscape that is punctuated by a bright ray of sunshine – melancholy and hope, blended into a seamless whole.

Still features a cinematic opening with synths, piano and strings. It has a gorgeous arrangement, accentuated by Marcus’ tender vocals. A soaring bridge by a string ensemble brings this song to a beautiful crescendo. The song speaks longingly of of a lover who is far away, but “deep within me, I can feel you still.” It’s one of my favorite songs on Greyscale.

Misery steps up the tempo of Greyscale once again. This is a high-energy, danceable song, with a great beat, soaring chorus and lots of neat touches. The lyrics speak of the purifying effect of the misery and pain that love can inflict.

Light Grey and Dark Grey are instrumental interlude s, which are somewhat satisfying but not all that memorable.

End of Words starts out slow, but builds into a big, bombastic melody, with Marcus’ voice soaring over the top. Wow! This is another track with an undeniably cinematic feel to it, with strings and synths providing a delicious sonic blend. It portrays the grey clouds that we carry within us, and images of the past and present that weigh us down and sometimes leave us speechless. Quiet interludes are interspersed with towering synth riffs. Fantastic!

I’ll Find – The closer of the album starts with a quirky, off-key synth riff, playing over a peaceful melody. Unlike many of the layered arrangements on Greyscale, this song has a sparse arrangement that is accentuated by deliciously spooky synth riffs. Its clever lyrics tell a story: “Listening back to words you said/Echoes ask what comes ahead.” and “Is this the future/Will there be beauty?/Can love be a problem?” are memorable examples. The song ends with a series of delicate synth riffs and percussive sounds gently fading into the distance, leaving me with only silence.

There’s no question in my mind that Greyscale, the 8th studio album from Camouflage, is a must-buy for every lover of modern synthpop.