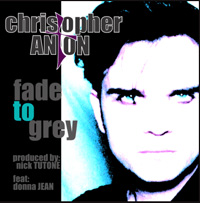 Producer Nick Tutone recently contacted me to let me know he recently collaborated with Christopher Anton (vocalist from Information Society and founder of the band Pseudocipher) to release a cover of Visage’s classic song, “Fade to Grey.”

Three versions of this synthpop anthem have been released on a new EP: the single mix, a Club Mix and the Astrotek Dub Mix. After listening to them for a few days, I’m extremely impressed!

Anton, backed by Donna Jean on percussion and keyboards and producer Nick Tutone on synthesizers, have fashioned a loving tribute to Fade to Grey that successfully updates this classic tune with a contemporary sensibility. In Anton’s reimagining of the single version of Fade to Grey, a driving but understated beat and layered, orchestral arrangement gives the arrangement a solid foundation for his soaring vocals. The French backing vocals are also given more prominence than in the original song.

What’s really refreshing is that the Club Mix and Astrotek Dub Mix also exceeded my expectations. The Club Mix features a more driving, layered arrangement that should make it excellent dance floor filler. This version also takes a slightly different approach to the instrumental interludes between the verses of the song that I really like a lot.

The Astrotek Dub Mix takes a slightly lower-key approach to the song. Again, a nicely layered arrangement that blends echoing synths with what sounds like some synthesized guitar in several spots. Some new instrumental interludes are introduced in this version that sounded awesome on my headphones.

In an interview with me, Anton admitted he hopes that this EP will expose more people to this beloved synthpop classic from 3 decades ago. Can it really be that long since Fade to Grey was released? It’s true!

Q. What inspired you to cover Fade to Grey? Are you big fans of Visage?

Christopher: We had wanted to do a dance version of an new wave song for some time, then Nick suggested ‘Fade to Grey’. I thought it was a great idea being that the song has such a trademark 80s style melody.

Donna: 2010 also marks the 30th anniversary of the song. (according to Wikipedia, Fade to Grey was released on Polydor Records in November 1980).

Q: What was your goal in updating and re-interpreting this synthpop classic?

Christopher: One of the conditions that Nick and I set up for ourselves when we started working together was that we were going to make music as an homage to synthpop. We’ve done more than that though by orienting ourselves in the dance genre, but with Fade to Grey we really do hope to reach people who are not already familiar with the track by interpreting it in this new form.

Q: How would you characterize the music your band produces?

Christopher: Dance music with themes of love and loss.

Q. What can you tell me about Destination: X, the full-length album that you plan to release next month? What will the style of this release be? What can we look forward to? And how does it differ from A Perfect Tragedy?

Christopher: I am so excited to be releasing Destination:X. This album has something for everyone in it, it took alot of blood, sweat, and tears to make, and I am blown away by Nick’s productions. The style stays true to synthpop, but I think of it as a tribute to all electronic music. It’s more of a dance album than YPT was, Donna does backing vocals on many tracks which is a nice addition.

Christopher Anton wasn’t on my radar screen before. But he definitely is someone I’ll be watching more closely in the months and years ahead. I can’t wait to give a listen to Destination:X when it’s available.