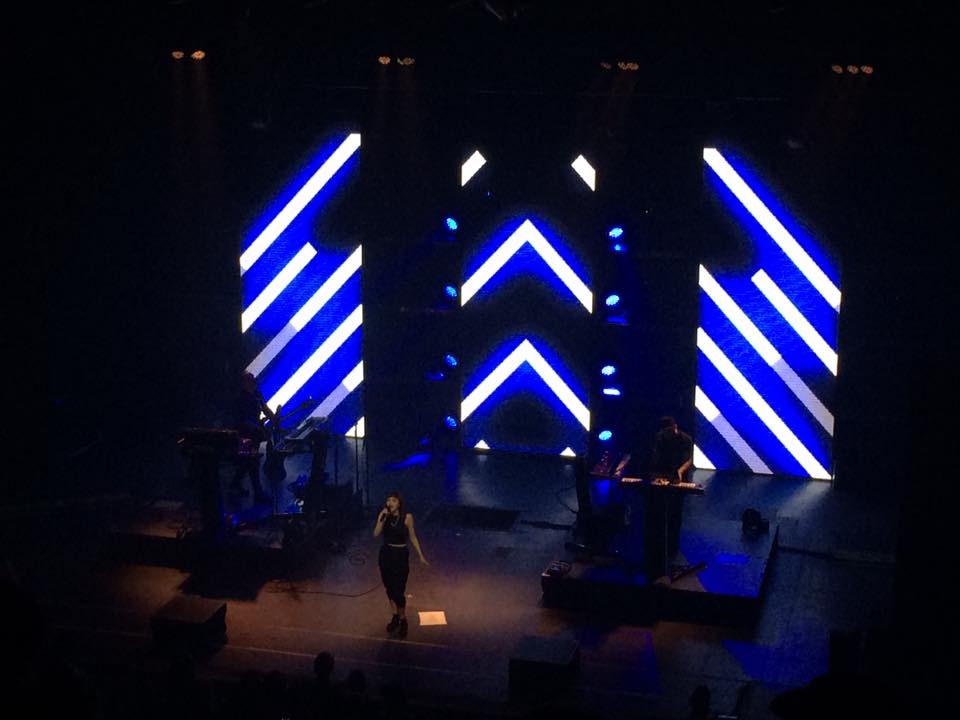 CHVRCHES played an outstanding show to a sold-out crowd at the Riviera Theatre in Chicago on March 13th. Between the energy and showmanship of the Glaswegian trio and the enthusiastic Windy City audience, it was an unforgettable night.

In its electrifying hour-and-a-half set, CHVRCHES rollicked through a set list that included many favorites from The Ghosts of What You Believe and their new release, Every Open Eye. Front woman Lauren Mayberry was a whirling dervish, prancing back and forth across the stage, dancing and spinning. Her energy level amped up the crowd, which was on its feet for the entire show.

For several songs, the roadies wheeled a small set of drums onto the stage, which Lauren used to add rhythmic, amplified beats to the mix. This was especially effective at the end of Playing Dead, which featured an incredible percussive bridge, which you can see in the video below.

Band mates Ian Cook and Martin Doherty didn’t just stand morosely behind their synthesizer banks. More often than not, Ian was standing in front of his rig, playing a guitar or bantering with Lauren. Martin also got his moment in the spotlight about two-thirds through the show, when he sang High Enough to Carry You Over – the first time the band has ever performed that song live – and Under the Tide, from the group’s debut album. He really cut loose during the latter song, throwing his whole body into it, much to the delight of the crowd.

This incredible show wasn’t all powerful synths, guitars and drum machines, however. Toward the end of the show, CHVRCHES slowed down the tempo with the beautiful, haunting ballad Afterglow from Every Open Eye. With the stage awash in blue spots and a ragged rectangular white border looking like a portal into another dimension, the group showed a whole different side to their impressive musicianship.

The light show throughout CHVRCHES killer set was also spectacular. In addition to the usual array of vari-lights casting roving beams of color across the stage, CHVRCHES employed a set of state-of-the-art LED panels at the back of the stage, which flashed a variety of geometric patterns and other shapes in time to the music. At one point, a live arrangement of one song featured a sonar ping as one its sound effects. Each time it was played, a visualization of a sound wave traversed the giant LED panels – very cool!

In conclusion, I can’t imagine a more entertaining musical experience. This was the first time I’ve seen CHVRCHES live, and I must say, I’m mighty impressed! I can’t wait to see where this talented trio goes from here musically. With a strong sophomore album (Every Open Eye, which I reviewed here and declared the number one Modern Synthpop Album of 2015) under their belts, their momentum is truly unstoppable!

Every Open Eye: The fantastic new album from CHVRCHES [REVIEW]