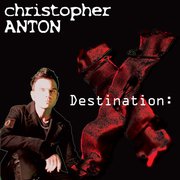 Christopher Anton, former vocalist of Information Society, recently released his first full-length album, Destination: X, which is one of the best new synthpop releases of 2010, in my opinion. Quite simply, he has succeeded in crafting a confident style that is uniquely his own. There is nothing tentative or unpolished about this album. This is a seasoned musician who knows what he wants and creates it, with unabashed delight.

Anton is a veteran of the electronic music scene. In 1998, he founded Pseudocipher, which produced several albums of electronic rock. During 2006-2007, he performed as front man for Information Society. Anton’s lineup on Destination: X is Nick Tutone on keyboards and production, and Donna Jean, who handles bass, vocals, keyboards and percussion. The trio scored a hit with a remake of the Visage classic “Fade to Grey” on Mirror Piece Records earlier this year, to commemorate the 30th anniversary of the song’s release.

Highlights of Destination: X include:

I Want to be Broken: A gorgeously layered mid-tempo number with a strong, underlying percussive beat gets this album off to a kick-ass start.

A Shattered Mind: An excellent dance-floor filler, this song grabs hold of your ears and won’t let go. I love the way Anton’s echoing voice wafts over a strong, insistent beat and soaring synths in this catchy song. Written by labelmate Richard Broadhead, this song hit home with Anton, who has dealt with the demons of addiction and the helplessness of having a close relative suffering from substance abuse, mental disorders, and destructive addictive behaviors.

Imitation of Life: A ballad that is reminiscent of Depeche Mode, with  Anton’s vocals taking on a percussive cadence and the synths supporting in the background.

Lovefix: An uptempo, seductive song with a simple message: “Give in to me. Don’t hold back. I’m your fix tonight.” This song was written by Anton, Tutone and Jean as a rebuttal to the stereotypical pop song message about sexual delusions of grandeur.

I am the Inside: A beautiful, brooding song about loneliness and carrying on after someone special has left you. This song really showcases Christopher’s ability to produce not only dance-floor fillers, but melancholy, layered synthpop that you’ll love listening to with a fine pair of headphones bracketing your cranium.

State: Another beautiful, brooding love song, a masterpiece of synth composition, which Anton wrote as a tribute to his wife. The bridge of this song features what sounds like an entire orchestra of virtual strings, soaring through my headphones. Pure bliss!

Destination: X is an awesome first solo effort by a veteran of electronic music. I highly recommend that you add it to your music collection.