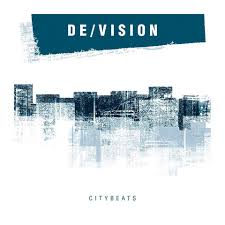 I don’t know what it is about me and DE/VISION. During the last decade, my feelings about their albums have fallen into what I call a “meh/wow cycle.” Citybeats, the 14th album from the German synthpop supergroup, contains 11 decent songs. I’ve just found very little that moves me.

This problem started for me with DE/VISION’s 2007 album, Noob, which had a few very songs that captured my imagination. That was followed by Popgefahr, which was amazing. Bristling with experimental touches and a variety of compositions, it was an astounding album. That was followed in 2012 by Rockets & Swords, which again left me feeling meh, except for a few songs. 13, released two years ago, was another outstanding album, full of some very cool synth, rhythmic and lyrical touches that had me going “Wow!!”

That brings me to Citybeats, which for me sits squarely in the “meh” category. The album opener, In the Still of the Night, is an excellent earworm that has played in my head for hours on end. They Won’t Silence Us, the first single from Citybeats, is also very good. But I just haven’t been able to connect emotionally with the rest of the songs.

Past DE/VISION albums have impressed me with their crisp, bright production. Citybeats, however, doesn’t have this same sound. I’m sure that’s due to DE/VISION experimenting by hiring an American duo, Ken Porter (intuition) and Stan Cotey, to put the finishing touches on their songs. I don’t think they did Steffen Keth and Thomas Adam any favors…

I guess you could say that I like the experimental touches in some of DE/VISION’s music, and I miss them when they’re absent. Think of the bleepy coda at the end of Who Am I and the aggressive, driving arrangement of Gasoline (13), the epic melodies and quirky synth touches in Until the End of Time and Time to be Alive (Popgefahr) and the distinctive siren in the middle of The Beauty of Decay (Rockets & Swords). There’s nothing comparable on Citybeats. The boys seem to have played it safe this time around.

Perhaps your experience with Citybeats will be better. Mine, unfortunately, was disappointing.