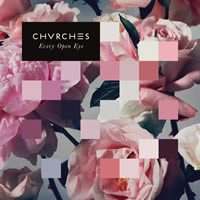 Every Open Eye, the new album from Glasgow-based CHVRCHES, is an aural delight, easily one of the best synthpop albums of 2015.

The group has accomplished a major feat: Each song is better than the last, with no filler in the 14 tracks the special edition of the album contains. Each track has its own quirky charms that reward repeated listening; many are insidious earworms that continue to play in your head, long after you’ve finished listening to the album.

Sophomore albums pose many challenges for new artists. Expectations of fans and the label are running high. The band wants to evolve its sound, but the label often wants a carbon copy of the first hit album. Busy touring to support the first album, the band finds it challenging to find time to write material for the next one. After setting a high bar its their first album, which the band took its time to write and record, the band feels tremendous pressure to get a new album out in time to capitalize on the momentum it has created AND raise the bar creatively. I’m happy to report that CHVRCHES has met these considerable challenges head on, and has delivered an exceptional second album.

The quality of the songs on Every Open Eye is universally high. The group has excellent song writing and production skills, thanks to the fact that all three members performed and wrote music for previous bands. The new album is not a big departure stylistically from The Bones of What You Believe, the group’s first album, but each song has a new, fresh appeal to it.

Some groups fall prey to over-embellishing songs with too many layers, too much production or too many noisy quirks. CHVRCHES’ arrangements, on the other hand, are masterfully crafted, with each instrument and effect playing an integral part – but no more. While this may sound cold and formulaic, it’s really not. Each song is beautifully crafted and display an impressive variety of song styles – from beat-heavy uptempo numbers to sparse, gorgeous ballads.

Here are some highlights of Every Open Eye:

Leave a Trace: This is easily the most accessible pop song on the album. Its topic is about moving on after a bad relationship breakup. “You took far too much for someone so unkind/But I will wipe the salt off of my skin/And admit that I got it wrong.” Even though the song is about a sad subject, it has a bouncy, irrepressible energy to it. I love the vocal harmony in the chorus.

Keep You on my Side: This track opens with an immediate high energy level, with an arpeggiated base synth providing the underlying propulsion, and Lauren’s staccato vocals riding on top. The chorus turns into an intense, bass and vocoded rhythm arrangement that will have you bobbing your head and gyrating your body parts in no time. More clever lyrics: “I don’t sleep well, laying low/Never keepin’ up, never lettin’ go.” This is one of my favorite tracks on Every Open Eye.

Clearest Blue: This is a nice mid-tempo number with a driving beat and a reverb behind it on the verses. Vocoded snippets in the background – a CHVRCHES trademark – add texture to this excellent track.

High Enough to Carry You Over: This is one of two songs that feature Martin Doherty on lead vocals. It features a simple but striking arrangement of synth, drum and vocal. In the song’s chorus, his voice is paired with a single synth, to memorable effect.

Down Side of Me: This is a slow, sparse number with a quirky drumbeat and synth line that gels very well with Lauren’s unique, pure voice. It features beautiful vocal harmonies and reverb-enhanced synths. The bridge of this song features Lauren’s voice on the lead vocal, plus two parts harmony, for a very cool finish.

Playing Dead: This is my favorite track on Every Open Eye. Starts off with a rhythmic vocal bit – a vocoded, staccato voice singing the word “go” repeatedly with a drum machine providing the beat – before Lauren’s clear, striking vocal comes in over the top. It contains defiant, unrepentent lyrics, too, in keeping with Lauren’s no-bullshit offstage personality: “You can tell me to move/But I won’t go/You can tell me to try/But I won’t go.”

Afterglow: This gorgeous track has an ethereal sparse arrangement: Lauren’s plaintive, crystal-clear voice plus a church organ. When I listen to this song with my eyes closed, I feel like I’m standing under a glorious sky full of stars. It’s a remarkable song!

When The Bones of What You Believe was released in 2013, CHVRCHES established itself as an incredibly talented group to watch. With the release of Every Open Eye, this Glaswegian trio is headed for the big time. This is one of those albums that is a must-buy. That’s not hyperbole – it’s simply THAT good!

P.S. CHVRCHES has become so popular in the States that a recent show in Chicago sold out in only a few hours – much to my consternation!