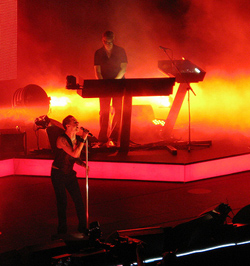 Depeche Mode has always been one of my favorite groups, thanks to their awesome songwriting skills and the infectious style that is uniquely their own.

I recently went through the song list on my iPod Touch and compiled a list of my favorite DM tunes of all time. It contains quite a few “old school” songs, but also some very recent ones:

What are your favorite DM songs?