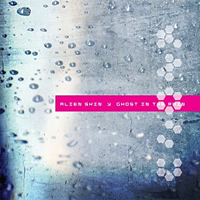 Ghost in the Rain, the new album from Alien Skin is a masterpiece, an ethereal delight for the senses. It’s the third album from former Real Life synth player George Pappas, following the release of The Unquiet Grave in 2010 and Don’t Open Til Doomsday in 2008.

Pappas has done what many synthpop artists have attempted but few have accomplished – he has carved out his own unique sound, characterized by beautifully crafted lyrics that create pictures in your mind and songs that are a bit melancholic without crossing the line into excess. I got the impression as I listened to Ghost in the Rain of a seasoned artist who is in supreme command of his instruments and his voice, able to blend the two into perfect, evocative tapestries.

This is not music to listen to while driving in your car. Rather, curl up in a chair in a quiet spot – preferably on a chilly, rainy night – slow down your busy mind and immerse yourself in its subtle and irresistible charms.

Here are some highlights of this incredible album:

Vintage – A haunting aural delight about a long-dead film noir movie star with whom the narrator is smitten. It features shimmering synths and minor key riffs, overlaid by George’s delicate voice. It is a great mood piece; Pappas does a masterful job of creating a song that evokes mental images of a femme fatale lighting a cigarette in a shadowy alley. Vintage sets the tone for the rest of the album with its moody atmospheric style.

Ghost in the Rain – Another deeply haunting ballad about a broken relationship. “I am a ghost/trembling in the rain/I am a ghost/Remember me this way.” An echoey, garbled voice track and sythesized chorus in the middle of the song reinforces the mental image of a ghostly figure, trapped between two worlds. Not scary, just sad. Once again, the synths are the perfect accent to this song – used for emphasis in between the vocals, rather than a layered wall of sound. Very effective!

Stay With Me – This is the closest thing to a love song on this album. Stay With Me is a nice mid-tempo melody with just a touch of melancholy around the edges.

Brigette – When he was writing this song, Pappas imagined an allied soldier in the trenches on the “killing fields” of France during World War I – where tens of thousands of troops gave their lived. He is awaiting the order to charge toward certain death, and holds in his hand a crumpled image of a beautiful woman who he has never met. He’s pining for a love that never was, while realizing he only had a few hours to live before the order to charge would come. The lyrics of Brigette are incredibly evocative: “My Brigette/As the earth becomes my blanket/And autumn dies/I’ll be left behind.” This is a beautiful, heartfelt song.

Perfect World – A quirky synth riff at the beginning gives way to a melancholy song. “Voices shriek aroud my ears/They cry forlorn, then disappear/But when you’re here, they dance and swirl/And when you’re here, it’s another world.” A chorus of voices with a synthesizer riff on top is the perfect instrumental close to this gorgeous arrangement.

Vanishing Girl – I love the concept behind this song. The narrator is obsessed with a girl at a local horror show who vanishes before the eyes of the audience. He watches her evey night, and fantasizes that when she disappears, she goes to be with him – until the next day’s show. But he longs to hang on to her, and to not have to share her with the audience at the horror show. “Vanishing girl, if I stop you from reappearing/Then you’ll always be with me/You’ll only be real in my private show.” Another very cool song – one of my favorites on Ghost in the Rain.

Music Box Doll – The album closes with another evocative ballad. This one is about a pale girl who is very fragile, like an old, cracked music box doll. The story teller remembers a better time when she was “full of life” and “ten feet tall,” but today she is a mere shadow of her former self.

If you’ve been reading this blog for any length of time, I’m sure it’s fairly obvious who my favorite synthpop artists are – groups like Mesh, DE/VISION, Iris, Babylonia, Foretaste and Marsheaux. Still, I’ve been hungering for some time now for an artist or album that would literally blow my socks off. So much of what I get to evaluate as the author of this blog is average, forgettable music that I just can’t connect with, melodically, lyrically or emotionally. When nearly anyone can produce electronic music, you’ve got to skim through a lot of dross to get to the real gold.

I’m happy to report that George Pappas and his Alien Skin project have exceeded my expectations on all these levels. Ghost in the Rain is a masterpiece, easily one of the best new albums of 2012, in my opinion. I highly recommend it!