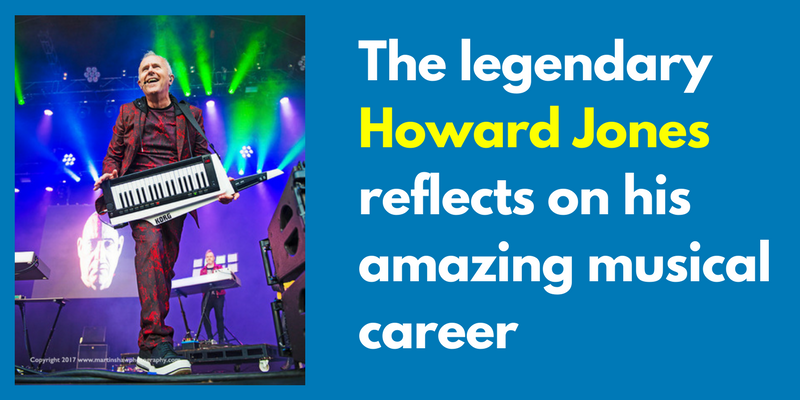 Howard Jones is currently touring North America with a five-piece band, the Electric Orchestra, and 5 other acts as part of the 2017 Retro Futura tour. During his stop in Milwaukee on August 3, I had a fascinating chat with him by phone about his influences, his relentless commitment to experiment with electronic music, why his music is upbeat and the state of synthpop. 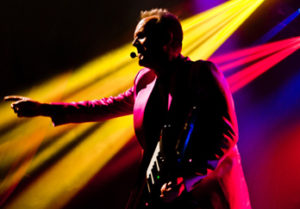 Chuck Frey: Thank you for taking the time to chat today, Howard. How has this year’s Retro Futura tour been going so far?

Howard Jones: It’s been outstanding. The crowds have been very enthusiastic and the weather’s been great. It’s been a wonderful tour so far.

Frey: I’d like to spend a few minutes talking about your influences. You’ve mentioned that Emerson Lake & Palmer influenced you – in particular, Keith Emerson’s style of audience interaction and his sense of freedom to do cool and unusual things with his keyboards. What was it about the music that turned you on?

Jones: I’ve looked up to Keith Emerson since he was with The Nice (pre-ELP), playing his Hammond L-100. He was classically trained, as I was. He would take great classical music and give it a rock feel. You know, he was a keyboard front man, which is very unusual. Something like Jimi Hendricks, but with keyboards, basically.

When they formed ELP in 1970, I was at one of their first major gigs, which was the Isle of Wight Festival. Keith had the Moog modular synth on stage, and he used it for the first time, and the sound of it was just mind blowing. He had a ribbon controller cable, which enabled him to bend the sound of that early synthesizer in some amazing ways. I also admired the fact that Keith was a showman; he had a sense of flair about him. He was definitely my biggest influence.

Frey: Who else influenced your early work?

Jones: I was a big radio listener. So, really, anything on the radio was of interest to me. I had very eclectic taste. Pop music, rock music, classical music. It’s really everyone I ever heard, to be honest.

Frey: Who or what are influencing your creative process today?

Jones: I like following artists’ careers back to their beginnings. It’s easy to do that with the online streaming services. People like Miles Davis. I’ve gone back and listened to some of his early stuff. Or the Beach Boys. I enjoy listening to an artist’s whole body of work. That’s what I get influenced by now. I’ve been listening to a lot of Earth, Wind & Fire at the moment. Whatever strikes my fancy. There is one new album I would single out as worthy of attention, and that’s the new Alison Moyet album. It’s really fantastic.

Frey: What is it about that album that caught your attention?

Jones: It’s got really great songwriting and lyrics. The production was done by Guy Sigsworth. I’m a big fan of his work.

Frey: You’ve described your career in recent years as one giant musical R&D project.What drives you to constantly experiment?

Jones: When I started, I wanted to do something different, using the technology of the day. Looking back at some of my heroes, they would use conventional rock and roll instruments, the musical tools of their day, but they would do so brilliantly.

I found myself in a position where all of this new technology was exploding. You could go down to your local music store and buy some of it. I really wanted to use these new instruments, and to use them in new ways. I’ve used that approach to keep myself motivated throughout my career. I’m always pushing forward, trying to get the most out of these tools that I can. I always want to be discovering new things, to do things in a new way.

Frey: You’ve also openly embraced new music technology. How does this help you in creating new sounds and pushing the envelope musically?

Jones: If you use new instruments, you’re bound to end up with new sounds. It’s a process. If you have the desire to create something new, you keep at it, experimenting with creating new sounds and new ways of doing things.

Frey: So do you just keep trying things to see what works?

Frey: It’s obviously working well for you. Listening to the tracks on Engage, they have a warmth and beauty to them that’s quite remarkable. I’m especially fond of Human Touch, the epic sound of Sister Brother. And I’ve got to tell you, Howard, that The Moon Over Kamakura is, in my opinion, one of the most epic synth instrumentals ever recorded! It’s quite beautiful.

Jones: Thank you so much. I’m glad you’ve enjoyed that.

Frey: There’s a positivity to your music that people find very infectious. That seems to be a constant thread throughout your musical career. You really want people to make the most of their lives and their talents. I’ve also read that you want your music to have an impact on people’s hearts and minds. Where does that come from?

Jones: I always thought that music was such a powerful thing. In a way, you have a direct route to the hearts of your listeners. Because I was aware of that, and how much music deeply affected me in my life, I wanted my music to really count. I wanted it to really reach people at a deep level. Life’s tough, you know. Things go wrong and the unexpected happens. I believe music can have the function of helping you get back up on your feet and start looking more positively toward the future. It’s also a matter of realizing that you can change certain things about your situation. I really wanted to incorporate that feeling into my music.

Before my musical career, I was working in a factory. But I was dreaming about being an artist, making records and playing shows for people. I felt that did that. I actually changed the course of my life. I knew that if I could do it, I absolutely believed anyone could realize their full potential, to be doing do what they really want to do in life, and to contribute what they can uniquely contribute to the world. I’ve just tried to keep that philosophy going over the years. That’s just been my “thing.” There are many ways of doing this, but that’s been my unique path.

Frey: Based on everything I’ve read about you, you’ve set and achieved some pretty lofty goals in your musical career. No one would blame you if you coasted a bit, took it easy and basked in all you’ve accomplished. But that’s clearly NOT you. You’re always looking to innovate and do new things. So what’s next? What are some of the frontiers and opportunities are you hope to explore in the next few years?

Jones: I’ve been focused on creating a really great live show, because I love touring. I’ve expanded to a five-piece band for this tour. I’ve got my favorite guitarist, Robin Bouldt, with me again. We’ve worked together for a couple of decades. And we’ve got Emily (Dolan Davies) on electronic percussion. I put a lot of effort into live performances because I believe that performances and concerts are one of the few times people can gather together and share an experience, particularly in the same space. I feel we really, really need that. I think that’s why the popularity of live music has increased.

You know, we all spend so much time on our smartphones and our computers that we live this remote life from each other. When you go to a concert, you can enjoy it together, dance together, sing together. That’s why I’ve dedicated a lot of my energy to the live side. I think that’s what people really want at the moment.

I WILL be making more studio recordings. But at the moment, I’m concentrating on delivering a really great live show, making people happy and cheering them up.

Frey: Do you expect to do any more multimedia experiences, like you did with the Engage tour?

Jones: Yeah, I would LOVE to do that again. I’m sure my next project will have an element of that in it. I enjoy bringing all those elements together.

Frey: How would you characterize the state of synthpop today? What are you seeing and hearing?

Jones: I think a lot of people are being influenced by 80s music today. If you’re a young artist, it’s really important to try to do something new. Draw influences from your heroes, but don’t do the same thing as them. Break out on your own and show us something new. That’s one of the great things about young people. They’ve got a new vision. They don’t want to play by the rules. Anyone who’s trying to innovate, who’s trying things and breaking things, I’m right behind them. 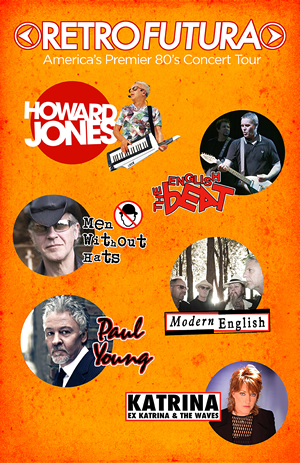 Frey: With today’s technology, anyone can create music and share it with the world. So it has become even more important to stand out in order to get noticed.

Jones: Yes, I absolutely agree. That’s really important. My definition of an artist is somebody who has a vision, and they use it – uncompromisingly! Don’t try to be like anyone else, but try to bring out your own unique voice. I think that’s the level an artist should strive for, and I really applaud people who do that.

Frey: I wish you well on the rest of the Retro Futura Tour, Howard, and I thank you again for taking the time to talk with me!

Click here to view the remaining North American dates for the Retro Futura 2017 tour. I highly recommend it!