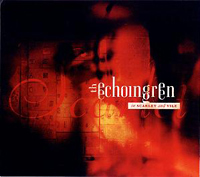 After 6 years, The Echoing Green has released a follow-up to its excellent album, Music From the Ocean Picture. Entitled In Scarlet & Vile, the seventh album from this veteran group is well worth the wait. The new album is a worthy successor, delivering on the core Echoing Green sound while incorporating a darker, more ominous vibe. That’s a good thing.

If the songs on In Scarlet and Vile have a darker tone to them, it’s in large part because the group has decided to tackle some of life’s challenging issues, such as the nature of suffering, temptation and grace.

“Almost every song on the record deals with some kind of struggle,” frontman Joey Belville explains. “Some resolve, some don’t. Both sides of that coin present hope, comfort, or both. Hope that things can resolve, or comfort in hearing that at least one or two people feel or have felt they way we do.”

The album gets off to a strong start with a rocking song called Heaven (The Devil’s in the Details). It features some nice vocal harmony between Joey and Chrissy Jeter and a driving guitar line.

This powerful vibe continues with a lush uptempo number called Revenge that combines synths and guitar into a strong, punchy number that is one of my favorites on this album.

Flame, one of the songs previously released as a single, is next up. It sounds like it’s arrangement has been tweaked slightly to freshen it up for the album. It’s another strong song, which features Joey covering a remarkable vocal range.

The Huntress features Chrissy on vocals, and has a definite 80s vibe to it. Not one of my favorites.

Let’s Go is another uptempo song underpinned by an echoing lead guitar. Joey and Chrissy trade off vocals in a point-counterpoint at several points in the song, and sing in harmony in other parts.

Dead Hearts – This mid-tempo song has a bit more of a layered, orchestral feel to it, and it sounds very much like a “traditional” EG song, with soaring synths and light, airy guitar punctuated by Joey’s distinctive vocals. The Suffer EP contained a  demo of this song; the finished version has a depth and a brightness to it that makes it really come alive.

Suffer – This is another song that was previously released on an EP. It goes back and forth between Joey’s verses accompanied by a sparse synth line and a big bombastic hook that melds a driving synth line with a powerful lead guitar riff. The contrast is quite striking. This as an awesome song that delivers the message that even in suffering, there is grace.

The preview version of In Scarlet & Vile contains a Glen Nicholls remix of Sanctuary, another single first released in 2010. It has an ominous feel to Joey’s vocals and a a powerful beat. The big highlight of this song comes near the end, when Chrissy has a solo that absolutely shimmers – I actually got goosebumps the first few times I listened to it – wow!

King Planet is one of the tracks that are exclusive to the special edition of In Scarlet & Vile, and it’s a must-have in my book. It’s different than anything you’ve heard from Joey & Co. The lyrics are more spoken than sung, almost like an electronified rap song. King Planet is brimming with attitude, and I can immediately tell he had a blast producing it. According to his comments in my recent interview with him, he explained that this song gave him an opportunity to flex some different musical muscles. King Planet is one kick-ass song!

Voices Carry, an 80s classic by ‘Til Tuesday, gets the EG treatment, with Chrissy’s vocals riding on top of a lush pastiche of synthesizers. It’s a beautiful, inspired cover – well done!

If you’re a fan of The Echoing Green, then In Scarlet & Vile is a must-add to your music collection. If you haven’t dug into their impressive catalog, then you owe it to yourself to check out this excellent album by one of the best contemporary synthpop groups today.