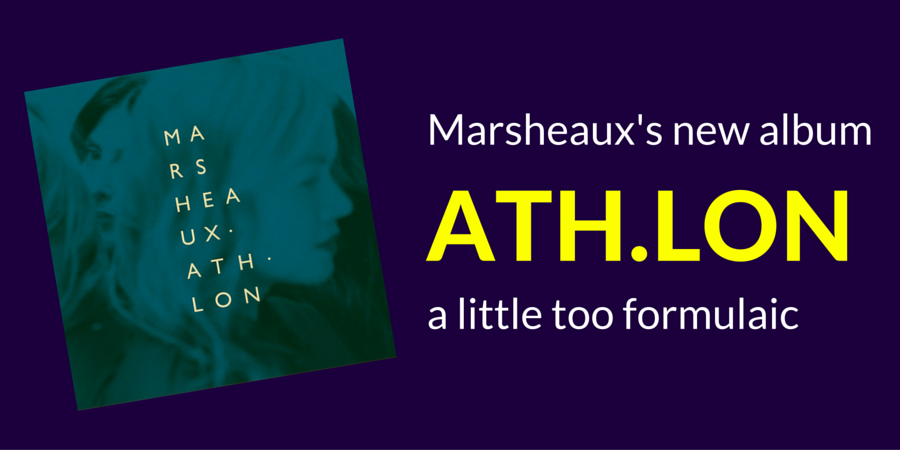 When you’re an incredibly talented electronic act like the Greek duo Marsheaux, you set the bar higher with each album. It’s been a wonderful thing so far. Sophie and Marianthi have assembled an incredible body of work that’s among the best in the genre.

But setting such a high bar also has its drawbacks, because once in a while you produce an album that simply equals your past efforts or doesn’t quite meet listeners’ expectations. That’s the case for me with Marsheaux’s new album, Ath.Lon. I know this may be a controversial point of view, because other music websites and bloggers have been effusive in their praise of it. The Electricity Club calls it “vibrant and deep, sunny and classy.” Classic Pop Magazine gives it 4 stars.

Ath.Lon adheres closely to the Marsheaux sound, which is both good and bad. The new songs on this album are all well composed and flawlessly produced, but were just formulaic enough that they didn’t provide enough sonic variety for my taste. Don’t get me wrong. I’m not being overly critical here. I guess you could say that Marsheaux has set the bar so high that my expectations are also elevated.

To be fair, Ath.Lon is one of those albums you can put on autoplay and simply soak in the aural delights of the wispy voices of the two ladies and the synth riffs they have constructed. It’s a pleasant listening experience. There’s just not a single song that makes me go, “Wow!,” with the possible exception of The Beginning and the End, which has a very cinematic feel to it.

I thought maybe when Sophie and Marianthi covering DM’s album, A Broken Frame, it would provide a creative shot in the arm. That cover album is outstanding; I even rated it one of my top 10 synthpop albums of 2015. But that doesn’t seem to be the case this time out, at least in my opinion. My guess is that because Marianthi now lives in London (Sophie is still based in Athens), their ability to experiment with different soundscapes was somewhat limited. It’s hard to say.

Once again, I don’t want to be seen as slamming Ath.Lon; I recognize that artists must always tread the line between evolving their sound and satisfying their current fan base by delivering more of the same. I just think they played it a little too safe, a little too formulaic this time around.