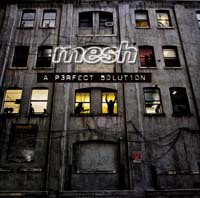 Some albums just grab hold of you the first time you listen to them. With other albums, it takes repeated listening sessions for the songs to grow on you. And some albums you “connect” with only in a limited way, no matter how long you listen to them. I’m afraid to say that the latter is the case with Mesh’s new album, A Perfect Solution.

I had high expectations for this album, especially because their last release, We Collide, is an absolute masterpiece.  Mesh set the bar very high for themselves with this stellar album. In comparison, A Perfect Solution just doesn’t measure up.

I waited for weeks to write this review, waiting and wondering if perhaps I was jumping to conclusions too quickly. Maybe if I gave it more time, it would start to grow on me, I reasoned. But that never quite happened.

To be fair, A Perfect Solution does contain some excellent songs, such as Only Better, If We Stay Here, It’s Gone and Who Says. But the rest of the album seems to be populated with fairly mediocre songs that just didn’t resonate with me.

If We Stay Here – A very strong opening track, with a rocking beat.

Only Better – A great choice for the first single from this album. Only Better has that signature Mesh sound – Mark Hockings’ distinctive vocals, angst-tinged lyrics, guitar for underpinning and soaring synths. The outro on this song feels bolted onto the song, and doesn’t quite seem to fit. Still, an excellent track overall. Be sure to check out the Alien 6 Mix of this song, which gives it a driving clubby beat and contains numerous neat little touches. It can be found on the Only Better EP, which was released a month before A Perfect Solution.

Everything I Made – Another solid mid-tempo Mesh song; just not very memorable.

Is It So Hard – A ballad; just doesn’t do anything for me.

Hold It Together – Another mid-tempo song that feels a little bit like filler.

The middle of the album is where Mesh seems to run out of steam. It’s not that they’re badly-written songs; they just don’t meet the usual standard that Mesh fans have become accustomed to.

It’s Gone – I like this pop-styled ballad, which is supported by a sweet-sounding acoustic guitar. Synths are used sparingly, mainly in the bridge of the song.

How Long – Another forgettable mid- tempo song, with somewhat inane lyrics: “If we’d ever write the play/We’d never need rehearse/Cause everything we say/Someone’s said it first.”

Who Says – What makes this song really stand out is the duet between Mesh frontman Mark Hockings and Julia Beyer of Technoir.

Hope.Dreams – Very much a classic Mesh mid-tempo song, with percussive synthesizers and Hockings’ minor key vocals. This is one of those songs that took a while to grow on me.

Want You – Not one of Mesh’s more memorable ballads.

The Bitter End – The closing song on A Perfect Solution starts out with an echoey synthsizer riff that sounds like an homage to VNV Nation, and transitions into a driving, industrial beat with Hockings’ punchy lyrics proving the counterpoint. This is a strong end to an otherwise average album.

A Perfect Solution marks the return of a former Mesh staple, the instrumental outro. They work well on a few songs, such as Who Says and Hope.Dreams but they seem randomly bolted on to other songs, such as Only Better and Hold It Together.

My verdict: A Perfect Solution is a pretty good album, but as a follow-up to their last album, We Collide, it’s not of the same caliber. Die-hard Mesh fans will want to pick it up to complete their collection. But if you’re new to the Mesh camp and are looking for an entry point into their extensive catalog, We Collide is still your best bet.