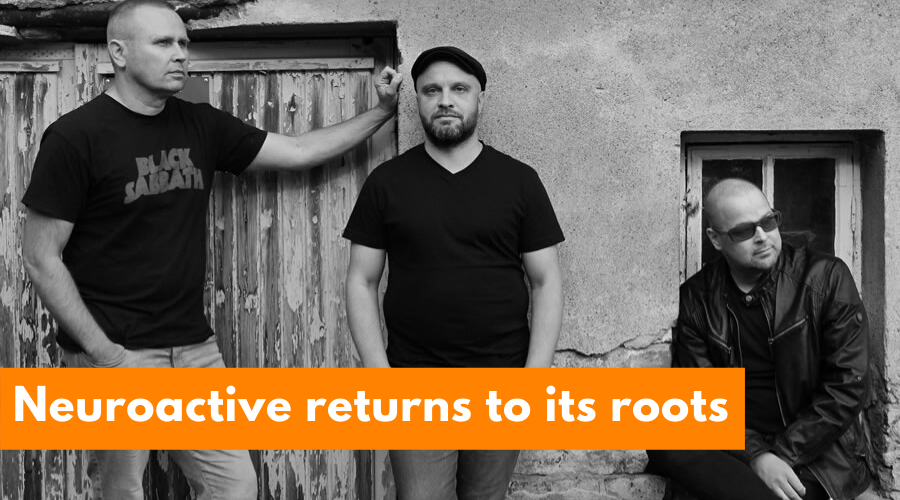 Neuroactive is one of the longest-enduring acts of the modern synthpop genre, with a number of lineup changes but an excellent body of work, steadily released between 1991 and 2014. They’re unquestionably one of my all-time favorites. But things have been quiet in Tampere, Finland during the last five years. Until recently.

Just a little back history on this remarkable band: Starting in 1991, the trio of Jarkko Tuohimaa, Ville Brusi, and Vesa Rainne published two acclaimed albums together, Morphology and Phonic Trace. The latter, published in 1997, featured the song Space Divider, which was played at the clubs all over the world. Soon after the release of Phonic Trace, Ville and Vesa left the band.

Neuroactive’s global footprint grew considerably in 1999 with the publication of Fiber Optic Rhythm, with Jarkko handing songwriting duties and new vocalist Kimmo Karjalainen adding his haunting, iconic sound to the mix. That was followed by Transients in 2001, the last album to feature Kimmo as the vocalist.

The next three albums, N-Gin, Antidote and Electra, featured a variety of guest vocalists. Electra was the band’s last release in 2014.

Jarkko recently published black-and-white pictures of the original Neuroactive lineup (with Ville and Vesa) and the second lineup (with Kimmo). Could this mean that Jarkko was reuniting the group? So, of course, I had to reach out to him for an update.

Chuck Frey: You recently published a picture of you with the other two original band members, implying that you have reunited to create new music. What are your plans?

Jarkko Tuohimaa: The next Neuroactive album, Minor Side-Effects is kind of looking back album. It’s all-new songs but with people whom I worked in the past. So we have songs with original line up (Vesa, Ville and me) and second line up (Kimmo and me), too.

Chuck: How did the three of you reconnect?

Jarkko: I’ve been in contact with Ville (one of the original members) all the time since we kind of broke up back in the day. He’s been one of my closest friends all these years. I’ve also done remixes and mastering for his and Vesa’s band, Flux Fin.

But the real push for working together came when I met accidentally Vesa in an art exhibition. I asked if he would like to sing one of the tracks from Morphology. I have thought about re-releasing Morphology as remastered and with remix or two. It’s now 25 years since Morphology, our first album! But that’s kind of on hold now until we get Minor Side-Effects out.

Chuck: How would you characterize the style of the music you’re making now?

Jarkko: I don’t think I have made any major leaps with the style in all these years. It’s been just a natural progression. It’s a bit rougher-edged synthpop.

Chuck: Based on a comment on your Facebook page, it sounds like the new album will be a return to the old Neuroactive sound. What new elements will you bring to it?

Jarkko: I’d say it’s maybe geared toward futurepop with this release, if you compare it with last release, Electra. There’s also a touch of cinematic in some songs…

Chuck: Was the approach of using guest vocalists on the last several albums as successful as you hoped it would be?

Jarkko: I didn’t really think it would be a successful thing for me. It was just because it was the only way to go forward for me. It wasn’t well thought out. I wanted to make music and I found someone to do it with me.

Chuck: What musical projects were you working on between 2014, when Electra was released?

Jarkko: I haven’t released anything since Electra as Neuroactive. I ’ve worked with some other artists during this time like Ne3oa, Flux Fin and Halo Effect. John from Halo Effect is also featured on Minor Side-Effects.

Chuck: What does your equipment lineup look like these days?

Jarkko: Unfortunately, I’m a terrible analog synth hoarder. I have spoiled my studio with too many synths. We live times when it’s all too easy to get carried away with these machines. It’s so great to see this retro boom in all synth design. It’s so easy to get great results with these new analog synths.

Chuck: For many years, you recorded in your own studio. Is that still the case?

Jarkko: Yes, I’ve got my own studio where I do my own music and remix, master and produce for other artists too. Vocals are recorded at each vocalist’s home setup.

Chuck: What is your songwriting process like and how has it evolved over the years?

Jarkko: The biggest revolution for me happened when I moved from hardware sequencers to software sequencers. Fiber-Optic Rhythm was the first album I did with Cubase VST after that I moved to Logic.

I don’t really know how it’s changed over the years, but I mostly start from a chord progression. Usually, it’s chorus chords that come first. Then bass and after that, I create melody parts. It’s great to be in a state where I know when a song is good enough and the mix is ready. It was one of those things that was hard in the past for me. I don’t really push myself with schedules with these releases nowadays. I just release it when it’s done…

Chuck: Personally, I’m very excited that Kimmo Karjalainen is back on vocals. He was a key part of the Neuroactive sound, in my opinion. Are you pleased to be reunited with him?

Jarkko: Yes, it’s great to have him on vocals again in this album. The funny thing is that we never really said, “That’s it with our cooperation.”

Kimmo did his own Huminoida stuff and I was supposed to make my all-instrumental album (which I never did). It’s still very open about what we do in the future. His vocals are the oldest from this album, recorded 4 to 5 years ago.

Chuck: What’s the timing on your new release?

Jarkko: It will come out this year and it will be released by Alfa Matrix. The master is now done so it won’t be too long now…

Chuck: Do you have any plans to tour after the launch of the album?

Jarkko: No plans for a tour, but we will probably do some gigs to support it.