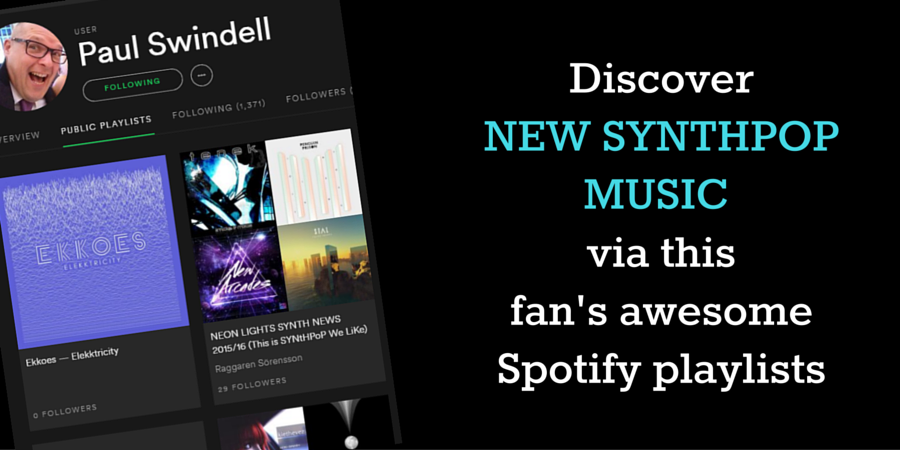 When it comes to modern synthpop music, Paul Swindell is like a modern-day Christopher Columbus. He is an explorer who reveals the New World of emerging synthpop artists for the rest of us.

Paul has been a fan of electronic music since the 1970s. Lately, he has become a big fan of Spotify as a tool to uncover promising new synthpop acts, and he has created numerous playlists that are a delight to explore.

What drove him to create these marvelous playlists? Locating obscure but promising synthpop acts wasn’t easy. Even though he was a Spotify user, its recommendations weren’t very good. “Also, on social media I found it difficult to find new material among the reposts of familiar tracks,” he explains.

To solve this problem, he started creating Spotify playlists, first for his own use and then for sharing via his New Spotify Synthpop Facebook group. This, in turn, became a community of sorts where other synthpop fans can share their favorite finds and bands can contribute their tracks.

“At the heart of it I like to get recommendations from real people, such as Raggaren Sorenssen, who’s a big contributor to the group,” Paul adds.

I’ve added it to the list of sources I check each week, searching for intriguing new tracks and groups to feature on my Modern Synthpop Facebook page. I’ve discovered some real gems here, which I plan to review on the blog as time permits. I’ve also followed Paul’s account on Spotify and several of his lists, so I can listen to them while working out or driving.

I love the variety of themes and geographical focal points in his playlists; the latter really drive home the point that modern synthpop is a truly worldwide phenomenon. His monthly playlists are also quite useful to keep up with the latest releases in this amazing genre and Paul’s newest discoveries.

Within the Facebook page, tracks are embedded as 30-second snippets – enough to give you a flavor of the artist’s sound. Paul also includes a link to the band’s Spotify page, where you can further explore their catalog. If you love what you hear, I encourage you to buy the artists’ music. They make a pittance from plays on Spotify – definitely not enough to live on! I practice what I preach: I recently purchased Zynic’s 2011 album, Fire Walk With Me, after discovering this excellent album via one of Paul’s selections.

If you if you uncover any stellar tracks you’d like to share on the New Spotify Synthpop Facebook group, please keep in mind that all submissions MUST point to Spotify tracks. Paul discourages YouTube videos and links to other online sources in this post stream.

Keep up the great work, Paul!

If you love what you hear, by all means follow his New Spotify Synthpop Facebook group and his Spotify synthpop lists. And always support the artists you love. By investing in their music, you help them continue to create more amazing synthpop!