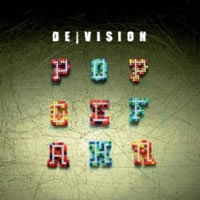 Popgefahr, the new album from De/Vision, has been hailed by several reviewers as their best ever. And I think they may be right.

When De/Vision released Noob 3 years ago, I was frankly underwhelmed. There were several pretty good songs on that album, but it never really connected with me, emotionally, lyrically or on any other level. It just didn’t strike me as one of their stronger efforts, even after numerous listens.

So I was pleasantly surprised when I started listening to Popgefahr last week. It contains a variety of well-written songs that combine the best elements of De/Vision and take them to a whole new level. Many of the songs stick in your head long after listening to them – the mark of great musicianship!

Production is very strong; every element is precision engineered and feels like it belongs there – always just enough, but never too much. Yet the arrangements are never sterile. Instead, they come to life with a variety of layered sounds, electronic beeps and playful textures – the band’s website characterizes their new sound as “feisty” and “flirtatious,” with a hint of danger, and I couldn’t agree more.

In addition, Steffen’s smooth, confident vocals bring an added layer of warmth to the arrangements on Popgefahr – which vary from moody ballads to infectious and rhythmic dance-floor fillers. This awesome selection of songs is strong proof that De/Vision made a great move by starting its own record label and producing Popgefahr on its own. This creative freedom has helped Steffen and Thomas to breathe new life into the trademark De/Vision sound.

Favorite tracks include the edgy single, “Rage,” the beautiful and moody “What’s Love All About” and the mid-tempo “Time to be Alive,” which is an aural masterpiece – you literally won’t be able to sit still when you listen to it. It’s throbbing rhythm instantly had me bobbing my head in time to the song’s insistent beat. “Plastic Heart” and “Ready to Die” are more traditional De/Vision numbers, while “Until the End of Time” is an amazing, ethereal song that is a powerful conclusion this excellent album.

My only minor complaint is that I wish there was more; De/Vision’s new album only contains 10 songs, but they are an excellent selection. In my opinion, Popgefahr is easily one of the best new synthpop albums of 2010, and is certainly De/Vision’s best release in many years. If you’ve ever admired their music, then you’ll definitely want to add Popgefahr to your synthpop collection!