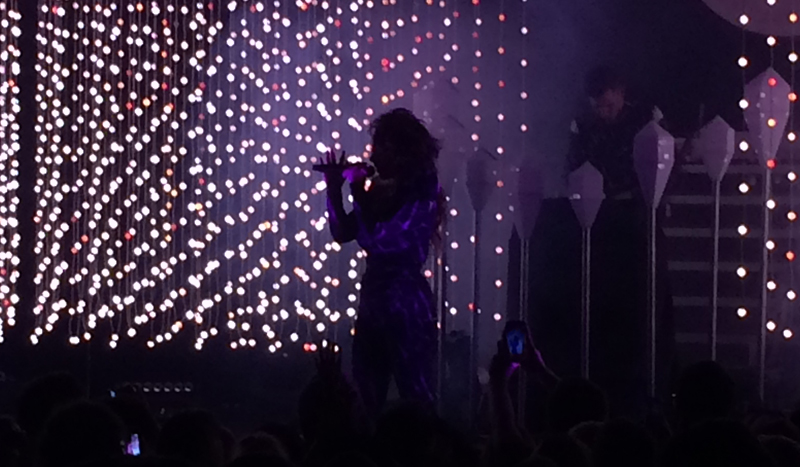 The Canadian synthpop duo Purity Ring is just beginning its first headlining tour in support of its second album, Another Eternity. They recently made a stop in Milwaukee, where they put on an outstanding show to an enthusiastic crowd at the intimate Pabst Theater.

Megan James and Corin Roddick played an excellent selection of songs from their first album, Shrines, and their sophomore album released last year, Another Eternity. All of the songs I hoped to hear were represented, including Crawlersout, Fineshrine, Belispeak, Obedear and Lofticries from Shrines and every single track from Another Eternity (click here for a review of Another Eternity).

A highlight of the show was the group’s simple but stunning light show, which utilized row upon row of hanging strings of lights that began at the top of the stage and ended a few feet from the floor. Throughout the show, they pulsed brightly in different colors and patterns, sometimes progressing from one side to the other or from back to front. The dimensional effects created by these arrays of lights were stunning! Geometric and organic patterns emerged and faded in perfect time with each song, accenting the most dramatic passages, while becoming more muted during the quieter interludes. Meanwhile, a set of vari-lights at the front and rear of the stage provided visual contrast, sometimes slicing through the forest of lights in contrasting colors.

In the center of the stage, Roddick punched keys on a drum pad, triggering the melodies, percussive and vocoded elements of Purity Ring’s enjoyable compositions. He also played a set of hexagonal, translucent shapes on poles that looked like giant crystals. When he struck them with a drumstick, these unusual drum pads flashed different colors, adding yet another visual element to this spectacular show.

Surprisingly, these home-made pads humanized Roddick’s performance. Too often, electronic groups are accused of being “knob twiddlers,” standing morosely behind their keyboards, controllers and drum pads, but showing a little physical movement or emotion. Throughout the show, he energetically tapped out sequences on these translucent objects, triggering a mini-light show. At one point, James joined him on the “crystal pads.”

James displayed an enjoyable stage presence, moving fluidly, in full command of the crowd. She didn’t banter much with the audience. But she did seem to be genuinely awestruck by its genuine enthusiasm. Most of the audience were on their feet and dancing during most of the show. The crowd cheered loudly after each song and sung along with some of the more popular tracks , such as Begin Again.

The forest of lights wasn’t just a backdrop to the band’s remarkable performance, either. At times, James wandered into the first several rows of lights, peeking around them seductively as she sang. Once again, the effect was very warm and organic, a pleasant change from the typical lighting setup for live electronic shows.

Later in their performance, toward the end of the song Dust Hymn, James climbed a set of stairs at the back of the stage to strike a large white, translucent disk with a drumstick. Each time she did so, it flashed brilliantly, briefly silhouetting her against it – much to the delight of the enthusiastic crowd (you can see this in the video of Dust Hymn below). It was a spectacular accent to this excellent track.

This isn’t to say that the simple but powerful light show detracted from the music. Far from it. I believe it actually elevated their performance, taking it to another level.

This was Purity Ring’s first visit to Milwaukee; here’s hoping it won’t be their last! If you haven’t seen this talented duo perform live, you’re in for a real treat. Don’t miss them!