Often, independent musicians face a long and challenging road to get their music heard. Most must hold down other jobs to keep the bills paid and a roof over their heads. Others face significant life challenges that force them to put their music on the back burner for a time, or pursue it in whatever spare time they can muster.

Such is the case with Shanghai-based Quieter Than Spiders, which has been slowly building a name for itself with several deliciously inventive, polished singles during the last six years. Leon, Yifan and Yao are part of the same family. They first appeared on the scene with the deliciously retro Shangai Metro in 2013. That was followed by three other tracks, Hibakusha, Land of Lost Content and No Illusion. But they kept such a low profile that very little was known about them.

QTS is about to make a much bigger noise when it releases its first full-length album on September, which includes updated versions of its existing songs plus a collection of well-crafted new tunes. Earlier this week, the band published a preview of the album on their Facebook page:

The band recently gave me a full preview of Signs of Life, which will be released on September 19 on Anna Logue Records. It contains a whopping 18 tracks. Plus, the band promises the album will include 10 remixes, which weren’t available for preview at the time of this writing.

My verdict? Signs of Life is very good. You’re in for a real treat when this album drops!

Yifan graciously agreed to a chat about what inspires the trio, how they create their music and what’s next for the Quieter Than Spiders.

Chuck Frey: How did the three of you meet?

Yifan: We are actually all related.

Chuck: What made you decide to form a musical group?

Yifan: We wrote songs and played instruments as hobbies, so we had naturally considered the idea of working together on a music project someday. About seven years ago, we finally decided to turn the idea into reality.

Chuck: What is it about electronic music in general and synthpop specifically that attracted the three of you?

Yifan: Most of all, I think we love the unique atmospheres that can be created with electronic sounds. We especially like music from the early synthpop era when people had to be inventive with sounds due to the limitations of their available technology. Certain songs from that time have a haunting and timeless quality – they somehow sounded futuristic and old at the same time.

Chuck: How would you describe the Quieter Than Spiders musical style?

Yifan: I think we have two contrasting styles. There is an up-tempo melodic pop side, but we also have a more reflective and melancholy side which I think perhaps captures more of our own specific style.

Chuck: What synths and other electronic production do you like to use to create your music?

Yifan: We use minimal equipment and don’t even use a designated recording space. We play many of the music parts by hand when we record because we enjoy the character that can come from all the slight imprecisions. We use simple midi keyboards for writing and playing melodies and we use Reason as a track recorder. We do use some software synth sounds but mostly we enjoy creating our own ‘home-made’ sounds either by playing with different sound waves and distortions or by manipulating sounds that we have recorded outside.

Chuck: Does the name Quieter Than Spiders have any special meaning?

Yifan: It is based on an old nickname that one of us had at school. We are all very quiet people and prefer to stay firmly in the background behind the music, so we thought the name would act as a good indicator of this.

Chuck: It sounds like you’ve had a rather challenging history. Your Facebook page said you had to put the group on hiatus for several years due to some medical issues. I’m glad to see that you’re back and close to releasing your album, Signs of Life.

Yifan: Thank you! During the time when we were completing the album, one of us become very ill. It’s not fatal thankfully, but it is incurable. We have each other, so things will be okay. Life is still nice; it is just more challenging and imperfect, that’s all. The album title comes from one of our songs which was inspired by someone we knew.

Chuck: From what I gathered looking at your Facebook page, you composed the songs on this album several years ago, and recently had them remastered by Stefan Bornhorst aka The Silicon Scientist. What did he do to enhance the music?

Yifan: Stefan was the first person to champion our songs. We are big admirers of his own music, so it was such an honor to have him mastering our album. We recorded our songs without much thought for the technical side of things such as sound levels etc. Stefan’s skillful remastering was vital in terms of getting all our songs to sound right and sit well together. We learned so much from him and we are so pleased with how the finished album sounds. Stefan has been so wonderful, along with Marc Schaffer from Anna Logue Records and Steve Lippert who designed the album artwork. They really are the kindest and most helpful people you could ever hope to know. 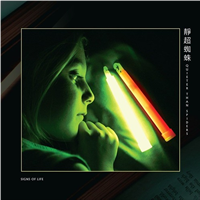 Chuck: Do you have a timetable for the release of Signs of Life?

Chuck: Has your musical style evolved since you originally recorded your first set of songs (which are quite beautiful, BTW!)? What can we expect to hear from your new music?

Yifan: Thank you for the kind compliment! Yes, you can actually hear our style evolving as you travel through the album. The first half is quite different to the second half which is slower, more experimental and has a sadder feel. There is a sample laden track called Fessenden Grove which sort of acts as a bridge between the two sides. The album includes some songs which are a little bit different to anything that people have heard from us so far. Tracks such as ‘The Signs Of Life’ and ‘The Statues’ are very introverted and try to capture very specific thoughts and atmospheres. We don’t know if they will make much sense to anyone else, but they certainly mean something to us.

Chuck: What is the electronic music scene like in Shanghai? Has it been challenging to find the audience for your music?

Yifan: When we first thought about starting out, there didn’t seem to be much of an electronic scene other than DJs playing western dance tracks. The emerging electronic music scene then tended to focus on very specific styles such as electronic lounge music and experimental ambient music. I think that now, after having imported the generic production-house electronic pop sound, many music fans in China are starting to peel back the layers and discover the earlier electronic music which started it all. Occasionally, we hear modern bits of music in Chinese dramas which sound very similar to synthpop, so perhaps that’s a sign of things to come.

Chuck: In what parts of the world are you getting the biggest response from fans?

Yifan: We’ve actually had a nice response from people all over the world which has been a pleasant surprise for us. The biggest response so far has come from Europe which is perhaps not surprising in relation to electronic music. There are people in China and other parts of South East Asia who like our music, but we are not well-known there, partly because we have never promoted ourselves. Many of our close friends and relatives haven’t even heard our music which makes it all the more amazing to us that people in far-away countries and continents have been listening to it!

Chuck: Do you plan to tour and perform live at some point in time?

Yifan: We have no plans to ever tour or play live. We have had some offers but we had to politely turn them down. We know this choice limits our potential and audience but we are okay with that. We didn’t start out with any particular hopes or expectations, so we are grateful and happy enough as it is.

Chuck: What’s next for Quieter Than Spiders? Your Facebook page says you’re writing new songs. When can we expect to hear them?

Yifan: We certainly intend to continue making music but it is probably going to be a little while until we can record new songs. We are still experimenting to find a way of recording and producing that is manageable for us now. We are filled with inspiration and song ideas so we are really looking forward to resuming things when the time is right.

You can listen to Quieter Than Spiders’ existing songs on their SoundCloud page and can follow them on Facebook here.