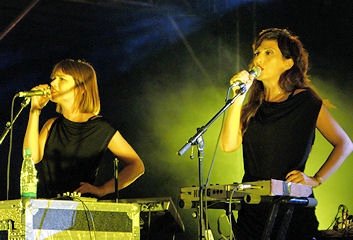 Lumineux Noir, the new album from the Greek synthpop girl duo Marsheaux, is a delight to listen to and is one of the top synthpop recordings of 2009, in my opinion. This masterpiece is filled with bright, energetic and memorable pop- and club-oriented songs that are perfect for a sunny summer day.

On this new album, Sophie and Marianthi – the two Greek goddesses who are Marsheaux  –  experiment a bit more with club friendly beats, guitars and the electronic toy-like Casiotone. The album features the girls’ trademark ethereal, seductive vocals, which often venture into beautiful harmonies. The song arrangements display a nice variety, sometimes sparse and other times lush, but never overproduced or campy. Marsheaux’s simple, irresistible melodies and lyrics continued to play in my head for hours after listening to Lumineux Noir — a tribute to Sophie’s and Marianthi’s remarkable songwriting skills.

As suggested by its paradoxical name Lumineux Noir, isn’t all sweetness and light electro-pop.  The album also has its darker touches: The closing track on Lumineux Noir is a very cool, brooding song called Sorrow about love and loss that appears to be inspired by Depeche Mode.

It’s hard to pick a few favorite tracks to recommend to you, because this is such a strong album from beginning to end. If I had to do so, I would say that the songs I like the best are So Far, Exit, Stand By, Loss of Heaven and Sorrow.

In short, two thumbs way up for Lumineux Noir! The album is available on iTunes and from a variety of online music outlets. You can keep up with all of the latest Marsheaux developments on the group’s Facebook page.