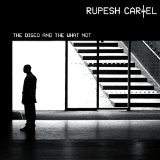 Rupesh Cartel’s 2007  release, The Disco and the What Not, is one of those CDs that I never get tired of. It contains an amazing collection of songs that are a delight to listen to on headphones. Lush, layered synthesizer arrangements combined with Viktor Ginner’s strong, expressive vocals are the closest thing to “ear candy” that I have experienced in some time.

The CD opens with the title track, which would sound right at home in any dance club around the world. Next comes About Denial, which is a catchy, uptempo song with some neat synth touches and vocal harmony. If you buy the deluxe 2 CD version of The Disco and the What Not, includes several great remixes of this song, including a club version and very good one by Rename.

One of my favorite tracks on the CD is Comes the Hour, Comes the Man. Its chorus is punctuated by sharp, rhythmic sythesizer riffs that sound really cool. Another standout is The Abyss, which opens with an echoey lead guitar (!) all by itself that sounds like it has been run through a synthesizer. Then the synths kick into a layered arrangement. The lyrics are interesting, too, including lines like “Homes. Locking doors for safety/And things will stay the same/We let sleeping dogs lie.” In other words, we tend not to like to disturb the status quo, because change could be even worse than our existing dire situation.

Hide Like This is anotehr notable track, which gets a very cool remix from Lowe on the bonus CD, adding guitars to the brew of synthesizers to excellent effect. Ghost White is the single from this CD, and it’s another great song. A very bright, percussive set of synthesizers carry the melody of this fun track, and the vocals are sung in harmony. It’s a great choice for the single.

In conclusion, The Disco and the What Not is one of my favorite CDs!