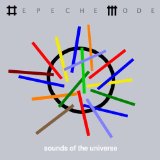 As a DM fan from way back who hasn’t been satisfied with any of their releases since Ultra, I was prepared not to like their new release, Sounds of the Universe. In fact, when I listened to the 30-second clips of the first two songs released on iTunes about a month ago, I wasn’t impressed at all. It met my expectations – from what I could hear, the songs sounded aimless and uninspired. In retrospect, that just goes to show you how limiting a 30-second song clip can be. Last week, I listened to a number of the full tracks on YouTube, and was impressed enough to download the entire album from iTunes.

Now that I’ve had a chance to listen to it (nearly non-stop) for several days, here’s my verdict:

Sounds of the Universe is Depeche Mode’s best effort in many years! Their latest release takes a retro turn; Martin Gore utilized analog synthesizers on this album, which gives many of the tracks a more interesting and colorful sound. Also prevalent on a number of songs is a rather fuzzy sounding electric guitar, which is used with great effect to punctuate many of the well-written songs. Each track has little touches that make it a delight to listen to on headphones. I listened to the entire album for the first time on my iPod Touch while walking at the local health club, and found myself smiling again and again, and going “Wow – what a cool song!” more than once. My favorite tracks include In Chains, Little Soul, Perfect, Miles Away, Corrupt and Oh Well (Black Light Odyssey Mix).

As a whole, Sounds of the Universe is an amazingly strong effort from the group that helped to define the synthpop genre over 20 years ago. Two thumbs way up!