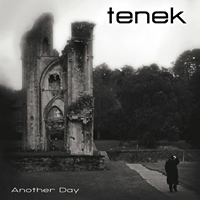 Recently, Tenek released an exellent new EP entitled Another Day. Like any good EP, it satisfies, but leaves you wanting more. In other words, it’s a tantalizing taste of what’s to come from the group’s forthcoming third album.

Another Day consists of two new songs – the title track and a darker song entitled A New Foundation – plus two remixes. Here’s a closer look:

Another Day: This is an excellent mid-tempo song with a nice beat to it. It’s got all of the characteristics of a great Tenek song: Tight production, engaging synth riffs and Peter Steer’s distinctive vocals laid on top. This song features some interesting interplay between synths, guitar and Steer’s vocals. Another Day is a solid Tenek track.

A New Foundation: This new track is my favorite on this EP. Minor key vocals set the tone of this song, which paints a picture of a lonely figure moving on from a broken relationship. Slow, syncopated vocals tell the story: “You are not the end of it all/In this world no one can find you/Resolution, made that call/Now it’s gone, we move on, build a new foundation.” A heavily distorted vocal sample during the bridge only adds to the ominous tone of this ballad. In terms of arrangements, this song is more sparse and stark compared to most Tenek tracks. But the sound effects and synths sound like they’ve been carefully chosen and placed. There’s nothing over-embellished here – it’s just right. Geoff Pinckney’s voice is quite striking on this evocative track.

Watch a video of A New Foundation on YouTube here

Elusive (Alien Six Remix): This remix of a single from Tenek’s EP2 album is due to be popular on dance floors, because of its pumping, rhythmic vibe. But interestingly enough, it’s not overdone, as so many synthpop-based dance remixes tend to be. Alien Six’s production is nicely understated; it  doesn’t pound your brain into submission with a thunderous beat, but has just enough to propel the song and get the bodies moving on the dance floor.

This remix of Elusive has a bright sound, with layered echoing synth riffs in its opening plus a collection of cool effects in the background. It’s more sparse in its arrangement, more stripped down to its core than the original. I particularly like how the track builds to a crescendo of strings just before shifting into a sparse, rhythmic chorus anchored by Pinckney’s soaring vocal. I like Alien Six’s work. They did a very cool remix of Mesh’s song Only Better for their last album, An Alternative Solution. By the way, Alien Six is Steer and Pinckney from Tenek.

Another Day (Airwolf One Remix): Airwolf One opts for a rhythmic, echoey sound that works well in this arrangement. Processed female vocal effects and heavily processed synths give this mix a trance-like feel. This remix is more layered than the original. It pushes the vocals back under a dense mixture until about halfway through the song, when they break into the foreground. Nicely done!

As I said, this EP has accomplished its mission: It has whetted my appetite for the release of Tenek’s third album, which is expected later this year.

Watch the preview video for the Another Day EP