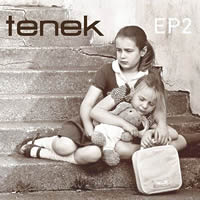 Tenek, one of the most consistently excellent acts on the synthpop scene, recently released a new EP that contains two new songs, a radio-friendly version of one of them and two remixes of songs from its stellar last album, On the Wire. The magic continues on this new disc, named EP2.

EP2 opens with What Do You Want, a likeable mid-tempo number that features tight vocal harmony between Peter Steer and Geoff Pinckney atop a rollicking mix of synths, violin, cello and a driving drum track. The string instruments bring a strong organic feel to this excellent song, and form the perfect counterpoint to the rest of the song’s tight arrangement. The violin part was played by the legendary Chris Payne, who was part in the original line-up of Gary Numan’s band from 1979 to 1989. There’s also a bit of cello in this mix. Nicely done!

The other new track on EP2 is next, Elusive, a dance floor filler that balances the duo’s awesome vocal harmony with a driving, echoing synth line. If God is in the details, then that explains why this is a divine track. Little synth bits drift in and out of the headphones, adding that extra element of aural appeal to an already solid track.

Next up is an alternative mix of The Art of Evasion, one of my favorite tracks from On the Wire. I think I like the album track a bit better, which was just a little bit punchier than this version.

After The Art of Evasion, the next track on EP2 is an alternative mix of Higher Ground, the last single from On the Wire. This track has a style similar to the last one- just a slightly different take on another excellent track that is hard to improve upon. Again, give me the album version over this one.

Elusive (Radio Edit) closes EP2. Its arrangement has been altered slightly to reduce its length and make it more radio-friendly. If someone asks you, “Tenek? Who’s that?” then have them listen to this track. If they don’t go, “Wow! These guys are awsome!” then call for an ambulance, because it’s obvious they don’t have a pulse!

I can’t wait for Tenek’s next full-length album. Hopefully they can make it to the States to play some gigs, too! Based upon what I’ve been seeing from the group’s Facebook fan page, the dynamic duo has been very busy playing gigs throughout Europe, steadily exposing more people to their unmistakable sound. I got to meet Geoff during the Chicago stop of the Legends of Synthpop tour in April; he was playing with Mesh. What a great guy! Bring Peter with you next time!

For more details on Tenek’s current activities and future plans, I urge you to check out this excellent interview with the Geoff and Peter on The Electricity Club’s website.