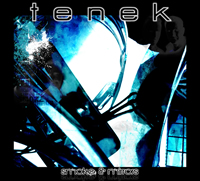 Since Peter Steer and Geoff Pinckney formed Tenek in 2007, they have built a solid following in the electronic music scene with a hard-driving, synth-driven sound and exceptional songwriting skills. So it’s no surprise that the group’s just-released third album, Smoke & Mirrors, kicks some serious ass.

The latest evolution of Tenek’s signature sound adds guitar and real drums to Pinckney’s enthralling synths and both members’ powerful vocals. These new instruments are perfectly integrated into Tenek’s arrangements, resulting in an anthemic, rock-edged sound that they hope will appeal to a wider audience, while still offering plenty of synth riffs and catchy hooks to keep their existing fans thrilled. The quality of the songwriting and production is first-rate. Smoke & Mirrors is an awesome new addition to Tenek’s impressive body of work.

As the title of Smoke & Mirrors suggests, its theme is that people are not who they seem to be. This is a common human condition, which Steer and Pinckney felt drawn to explore. The result is a body of work that is as least as good as, if not slightly better than, their last album, On the Wire.

Here are some highlights from Tenek’s excellent new album:

Everything Lost: This track launches Smoke & Mirrors off to a strong start. It’s a mid-tempo track with a great beat, propelled by a bass guitar and playful guitar riffs. Nicely arranged!

Fear for Nothing: This is another driving, propulsive track. Pinckney’s staccato vocals play with the guitar-driven melody and drum track in a point-counterpoint arrangement. It’s a very full-sounding song where the synths take a back seat. Yet this excellent track maintains the signature Tenek sound. Some vocal sound effects lend an air of mystery. In the bridge of the song, the drums take center stage, backed by synth effects and Pinckney’s distinctive vocals.

Another Day: This is the first single from Smoke & Mirrors. A shimmering lead guitar is underpinned by a rhythmic bass track. I love the vocal harmony on this track.

Blue Man: A big, reverberating synth and guitar duo opens this down-tempo song before the wall of sound kicks in. The opening sounds vaguely reminiscent of a Rush track from the 1990s. This track features a minor-key lead vocal, which sounds very cool. Blue Man talks of the high cost of deception and lies in the song’s intriguing vocals: “You broke the wire/You crossed the line/Yet all the while/Deceiving everyone” and “Like diamonds we pretend/Shiny to then end/You’re losing something/Now I remember to forget.” This is one of my favorite tracks on Smoke & Mirrors.

A New Foundation: This cool track features a sparse arrangement of Pinckney’s vocals over a drum track with just a few synth accents. Less is more. A New Foundation features a cool bridge with echoing voice effects. As usual, in this song, things are not what they seem, and this is reflected in it’s lyrics: “You are not the end of it all/In this world no one can find you/Resolution, made that call/Now it’s gone, we move on/Build a new foundation.” This is a very cool track!

Imitation of Life: This excellent synth-driven track is more from the classic Tenek mold. Cool, soaring synth lines alternate with Steer’s vocals, resulting in a great melody that had me hooked immediately. Its lyrics speak of someone who is living a lie, whose faux life is easy for everyone else to see, but not for the protagonist of the song: “Is it hard to conceive/That you’re not what you seem?” Imitation of Life is probably my favorite track on the album.

Sunlight: This track starts out with a pattern of drum beats before Pinckney’s vocals kick in. Its arrangement features lots of cool sound effects, but especially at the end of each chorus. Another excellent track. The lyrics contrast the lightness of someone who is living a happy life (in the sunlight) versus someone whose outlook on life is clouded (in the shade).

Soloman: Echoing synths and rhythmic drumbeats open this mid-tempo track, before a crystalline lead synth rises over the top. Vocal harmony adds a satisfying touch to this excellent track. The lyrics speak once again of someone who has gotten lost in a world of lies and deception: “In a place in your mind/The truth was always hard to find.”

Smoke and Mirrors: This is an unusual track, but it has really grown on me through repeated listens. The title track of this album features more vocal harmony in the chorus, interplayed with a lovely synth line. Distorted sounds add interest without sounding forced or out of place. The lyrics are very direct: “Things are not what they seem/It’s easier to hide/There’s so much left unseen/And you are not my friend/Your silence stands in the way.” Toward the end of the track, there is a pretty major drum riff that you would have never heard on previous Tenek tracks. But it sounds just right as part of the new and improved Tenek style.

Tenek has done an excellent job of evolving their sound in an exciting new direction without leaving behind the unique style that has brought them this far. The group’s goal was to add more of a pop sensibility to their synth-based sound. I can’t say for sure if they have achieved that. You won’t hear a Tenek song played any top 40 rotation on a radio station anytime soon. But Smoke & Mirrors should definitely propel Messrs. Steer and Pinckney to even bigger levels of popularity, both within the electronic music scene and outside of it.

Now if they would only extend their tour to the States!