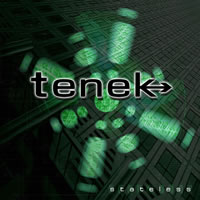 Tenek’s new album, Stateless, is one of the standout synthpop releases of 2009. It’s filled with infectious, complex songs that are a delight to listen to, with a myriad of rhythms and textures that are pure ear candy.

Tenek is the latest project from Geoff Pinckney (The Nine/Mesh) and Pete Steer. Both gentlemen have had long careers in the UK electronic music scene, and it shows in the confident, polished but never over-produced arrangements on Stateless. This is the first full album produced by the duo.

What really sets Stateless apart is the variety of songs, from synth-driven pop to club-friendly, beat-heavy, densely arranged floor fillers, plus several impressive instrumental tracks. A number of songs do an excellent job of blending synthesizers with guitars – a rarity in most electronic music these days. Steer’s guitar playing is used for emphasis, and never overwhelms the arrangement of the songs.

I’m a fan of layered arrangements where different elements swim around in the headphones, sometimes supporting and other times contrasting with each other. That means there’s lots to love in Stateless. There is literally no filler on this album. Every song is a strong effort in its own right.

Here are a few highlights:

Breakdown – One of my favorite tracks on Stateless. A club-friendly beat becomes really pronounced in the chorus of this densely layered arrangement. Vocals are punctuated by some use of vocoder, but it’s not excessive.

If I Should Fall – A driving uptempo number with nice use of vocal harmony. Another favorite from this album.

Where’s the Time – A rocking song with a great rhythm. Rather sparsely arranged, with pulsating synths and lyrics providing a very effective counterpoint to each other.

Fatality – A mellow instrumental track that starts out with a sparse beat, adds an understated, spacey guitar riff and is eventually punctuated by driving synths about two-thirds of the way through.  Nice!

I Don’t Cry (For You) – Intelligent lyrics and soaring synths combine with a nice, driving beat. Synthesized guitar is used nicely for emphasis between the chorus and verses. Another one of the better songs on Stateless.

Less is More– A driving beat and chilly, cool-sounding synths combined with Geoff’s sharply-punctuated vocal stylings make this perhaps the best track on the album, in my opinion.

State of Mind – Spacey opening that quickly evolves into a lush arrangement with pulsating, layered synths.

Sombre Friday – An awesome chilled-out instrumental that you simply must listen to on headphones. Nice layered arrangement point-counterpoint about halfway through the song between the stately “chorus” synths and an electric guitar.

If you’re a fan of contemporary synthpop, chances are you’re going to love Stateless, which is released on the Toffeetones label. I can’t wait to see where Pinckney and Steer go from here!