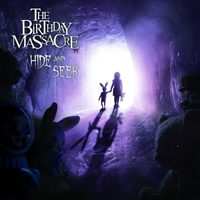 For some reason, The Birthday Massacre was never on my radar screen until a few months ago, when I was exposed to their Imaginary Monsters EP. Intrigued by what I heard, I dug into their back catalog, and immediately fell in love with many of the tracks on Pins & Needles and Walking With Strangers.

That only served to heighten my anticipation for their latest album, Hide & Seek, which was released in early October. It was worth the wait: Hide & Seek is easily The Birthday Massacre’s (TBM’s) best work to date. This new album further solidifies ther position as producers of some of the finest synthpop music on the scene today.

Hide & Seek builds upon TBM’s traditional recipe of big guitars, soaring synth riffs and driving percussion, with Chibi’s crystalline, slightly sinister vocals riding on top – but with some exciting new twists added. Normally I don’t much like female fronted bands, but with TBM I’m willing to make an exception. Chibi has an amazing voice that fits the feeling of their music perfectly.

For example, on the second song of Hide & Seek, Down, Chibi belts out several lines of screamed lyrics during the chorus. She does a great job, too- and it fits right in with the song’s theme. Down is without a doubt the most head-banging song on the album, and I mean that in the best possible way. Just try holding your head still when the pounding guitar riffs and Chibi’s raucous chorus kick in! Not surprisingly, this song was the opening track of their awesome show in Milwaukee in early November. It immediately got the show off on the right foot, at a high energy level.

Stand-out uptempo songs include In the Dark, Alibis, Calling, One Promise and Need. Hide & Seek also contains a gorgeous selection of slower songs, including Play with Fire, In This Moment, Cover My Eyes. These songs are dazzling with their awesome point-counterpoint between the synths, bass guitar and vocals. These vocal tapestries are best appreciated with your eyes closed and a fine pair of headphones bracketing your skull. The vocal harmony in the chorus of the closer,  The Long Way Home, is a divine piece of aural splendor.

With their impressive body of work, The Birthday Massacre has accomplished something remarkable: they have managed to define and evolve their very own sound that is not derivative of anyone else’s. There is no filler in Hide & Seek. Each song is a gem in its own right. I can’t recommend this album enough – it’s a masterpiece, The Birthday Massacre’s best work yet!