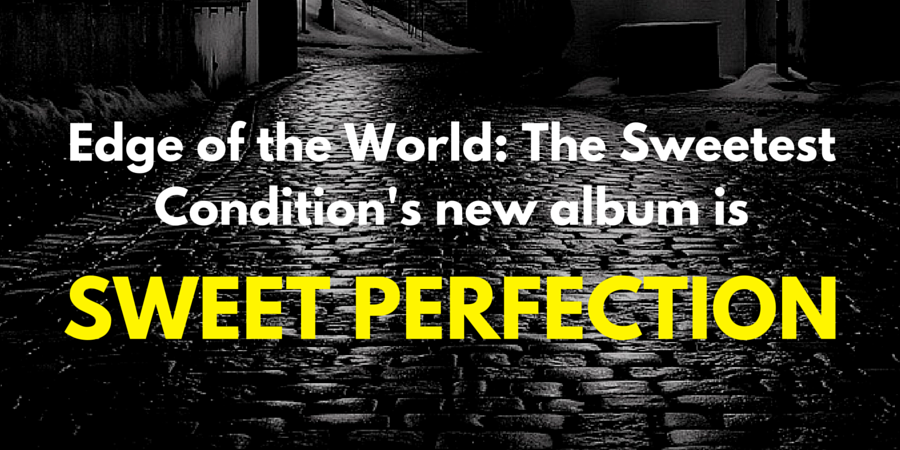 The Sweetest Condition, a talented synthpop duo from Nashville, recently released an excellent debut album – Edge of the World – that shines with a unique dark electronic style, strong female vocals and polished production. 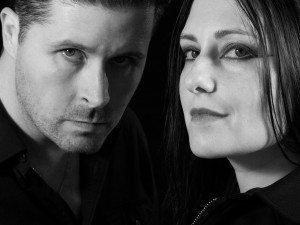 Jason Reed Milner (music + synths) and Leslie I. Benson (lyrics + vocals) have succeeded in carving out their own unique sound and style, which it calls electro-industrial synthpop. According to the band’s website, its style blends iconic sounds of the ’80s, industrial muscle of the ’90s, and cinematic soundscapes with hints of EDM. Edge of the World is The Sweetest Condition’s first full-length album. It follows a 5-song EP, Truth & Light, that the duo released in 2013.

If you like your synthpop quiet and ethereal, Edge of the World may not be to your tastes. But if you favor more powerful arrangements and singers, you’ll love this exciting new album. I found it to be engaging and refreshing in today’s world of me-too sounds. The excellent songwriting and tight arrangements are what distinguish The Sweetest Condition from the myriad of new artists who contact me to evaluate their music. Reed and Leslie clearly know their way around songwriting and production – bravo!

It’s nice to hear an album where the artists take an agnostic view of the instruments at their disposal. This is not a synth-centric group. That gives it a rockier sound that takes command of the speakers (or headphones) and doesn’t let go. Here are some highlights from this excellent new album:

Beyond the Blue: The album gets off to a rocking start with this uptempo number. It begins with a sparse arrangement, but soon explodes into a layered synth, percussion and harmonized vocal on the first chorus. Leslie’s voice is strong and expressive, and confidently propels this well-written track forward.

Control: A mid-tempo song that adds a lead guitar to the mix, arranged in a point-counterpoint with Leslie’s powerful voice. She also sings harmony with herself, to great effect.

Miles Away: Another kicking mid-tempo track with a solid bass synth and drum line propelling it forward. Once again, a guitar figures prominently in its arrangement. Impressive!

Now: The Sweetest Condition isn’t just about strong instrumental arrangements. Many of its songs also have powerful lyrics that tell engaging stories. A case in point: Now. This song tells the story of a protagonist who is trying to escape the pull of alcoholism. A fairly simple verse and piano accompaniment gives way to a powerful set of choruses that amp up the energy with a wall of synth, guitar and highly distorted background vocals. Now is one of the most powerful tracks on this excellent album.

Secret: The protagonist of this powerful tune will not be denied. She’s pursuing a male suitor who she has been watching for a long time. But he has gone into hiding to escape her charms. She insists that while he may be able to run, he definitely cannot hide: “Oh little boy/Come out and play,” Leslie croons in a sultry voice. “Praying to the light won’t save you/I make the rules/Time to obey/I get what I want/You can’t run away.”

The War is Over: Lest you think Edge of the World is filled with Leslie’s eardrum-melting ballads, this down-tempo number showcases a deliciously different side of her voice. On this track, she laments the emotional damage she’s suffered from a relationship that ended badly (“The sun is rising/The war is over/ But your love has left me a wounded soldier”).

This Poison: This mid-tempo track tackles the subject of addiction. The protagonist can’t stay away from a man who she desires, but who is ultimately destructive for her. This song features some cool synth effects, plus a more plaintive tone to Leslie’s vocals. She’s in the grip of something powerful, and doesn’t know how to escape it. This is a hauntingly beautiful track. In previous tracks, she was clearly operating from a standpoint of power. Now, she has been all but destroyed: “The damage is done/I can’t outrun this poison.”

I’m very impressed with Edge of the World, and can’t wait to see what’s next from Leslie and Reed of The Sweetest Condition!