Welcome to Modern Synthpop’s list of the top 10 new albums of 2018. As usual, there was a wealth of excellent music to choose from, produced by excellent existing acts and new ones. I hope you enjoy exploring this amazing music!

Each year, as I assemble this list of the top modern synthpop albums of the year, I realize I have the world’s best side gig: Previewing, reviewing and sharing some of the most incredible music on the planet. 2018 was no exception, with amazing new music from some of the genre’s best known artists, as well as scintillating surprises from new artists.

As I’ve done for the last several years, I’ve ranked the top 10 new albums of 2018, but am also listing honorable mentions. There’s just so much great music available that I have to expand the list

Electro Spectre is one of the most consistent acts on the modern synthpop scene. That’s not to say they are boring in their output. Far from it! The quality of their music is so consistently high that they become a perennial favorite of mine during the last several years – and of the followers of the Modern Synthpop Facebook page, judging from the number of likes their songs get. A Man-Made Sun is a worthy successor to the rest of their growing canon of music. Engaging melodies, quirky touches an exceptional vocals make this album a standout in 2018.

Listen to A Man-Made Sun on Spotify

Chvrches’ third long player is taking the world by storm, and deservedly so. It’s a fine collection of songs that moves their sound more strongly toward the world of pop – but without losing the soul of their angsty yet hopeful sound. To be honest, I didn’t take to Love is Dead as quickly as Every Open Eye, the Glaswegian trio’s 2015 album. But it revealed its charms to me gradually, and how it stands in my mind as a great progression of their song writing and style. Well done!

Listen to Love is Dead on Spotify

When I learned that Daily Planet was coming back after over 20 years away from the scene, I was very excited. My anticipation was rewarded by Two in 2014 and Play Rewind Repeat in 2017. Both are excellent albums. But I wasn’t prepared for how exceptional Johan‘s solo effort turned out. The song writing and arrangement on Utopia is only slightly derivative of the Daily Planet sound. It actually sounds reminiscent of early Erasure at times. Utopia is a scintillating collection of engaging, thought-provoking and uplifting tunes. This is simply an amazing album!

Favorite tracks: Utopia, Better Stories, I Can Read Your Mind

Listen to Utopia on Spotify

I have never considered myself to be a big fan of IAMX. I enjoy some of his songs, to be sure, but I am far from being a fan boy of Chris Corner’s work. Imagine my surprise when I listened to Alive in New Light, and was greeted by an entire album of exceptional musicianship. I was blown away! Sparse arrangements, evocative lyrics drenched in emotion (in the best way) and tons of cool synth touches. The variety of songs is also impressive – from brooding ballads like Stardust and Mile Deep Hollow to a dance-floor filler like Body Politics to experimental (Exit). Love it!

Listen to Alive in New Light on Spotify

If you’re in need of a Camouflage fix, look no further than this excellent album from Marcus Meyn (one of the two vocalists from the German synthpop pros), Jochen Schmalbach and Volker Hinkel. Meyn’s smooth vocals give M.I.N.E’s music a familiar topline, while the trio explores a variety of songs well outside the Camouflage canon. From ballads to mid-tempo stompers and songs in a more experimental vein, Unexpected Truth Within in chock full of unexpected delights.

Listen to Unexpected Truth Within on Spotify

Train to Spain – A Journey

Sweden has been a hotbed of synthpop talent for several decades. The tradition continues with Train to Spain, whose sound gets better and better with each release. A Journey captures the spirit of the 80s, with Jonas Rasmusson’s uplifting, bouncy and layered synth arrangements, strong percussive beats and Helena Wigebom’s lovely, alluring vocals. With this album, the duo’s second, Train to Spain takes us on a awesome journey that makes it one of the best albums of this year.

Favorite tracks: Saviour, Not With Me, Monsters

Listen to A Journey on Spotify

Emika – Falling in Love with Sadness

Falling in Love with Sadness by Ema Jolly (a.k.a. Emika) highlights the Czech-born artist’s continued growth as an artist. Released on World Mental Health Day, it calls attention to depression, an emotion that has colored her life as well as several generations of her family. This theme makes Falling in Love with Sadness her most personal work to date, but it also celebrates her growing maturity as an independent artist. It’s filled with a surprising variety of strong melodies, flawless arrangements and of course, her distinctive, noirish vocals.

Favorite tracks: Wash It All Away, Run, Close

Listen to Falling in Love with Sadness on Spotify

Shelter is the welsh duo of Mark Bebb and Rob Bradley. Soar is their third album, and it’s a winner. Minimal arrangements bring Bebb’s strong vocal style front and center, backed by simple synth lines and minimal percussion. That’s not to say that Soar is boring. Just the opposite. The introspective topics of love and loss are beautifully served by this elegantly spartan approach.

Listen to Soar on Spotify

Sometimes it takes new synthpop or darkwave act several albums to hit their stride. That’s not the case with Promenade Cinema, a Sheffield UK-based duo who has delivered a stunning first album filled with what they describe as cinedramatic music. Their sound is haunting yet melodramatic, yet never crosses the line over to campiness. It doesn’t hurt that Dorian Cramm’s beautifully arranged synths perfectly complement Emma Barson’s hauntingly piercing vocals Living Ghosts only contains 10 tracks, but they are packed with style and substance that makes me look forward to whatever is next from this promising Sheffield, UK duo.

Listen to Living Ghosts on Spotify

The Rain Within – Atomic Eyes

The Rain Within is the cinematic electronic project of Andy Deane and Mike Johnson, who call Charlottesville, VA home – about as far from the noirish streets of LA or Berlin than you can possibly imagine. But on Atomic Eyes, they have captured a filmic sense of horror and beauty in their beautifully crafted songs of love and loss. The songs are at once catchy and ominous, with lovely piano and string touches deepening the gothic mood. A true standout on Atomic Eyes is Deane’s incredible, classicly trained voice. Put on the headphones, turn down the room lights, light a few candles and close your eyes. You’re about to be taken on an incredible journey as you explore The Rain Within.

Listen to Atomic Eyes on Spotify

As usual, the number of excellent modern synthpop albums released during 2018 exceeded the confines of a top 10 ranking. That’s why I have decided to give these outstanding albums an honorable mention. Congratulations!

Listen to all of this wonderful music 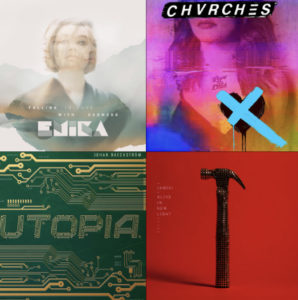 To make it easier for you to check out a sampling of these wonderful albums, I have created a new Spotify playlist:

If you just discovered the this blog or a friend referred you here, I strongly recommend that you follow the Modern Synthpop Facebook page. I frequently update it with news about the amazingly talented artists of this genre, highlight cool albums and tracks I’m listening to and share fun, sharable modern synthpop memes.

Best of all, every Thursday, I publish 12 hours worth of tunes, every 30 minutes (on the :05 and :35 of each hour). This informal “show” format lets you pick and choose which songs you want to check out. Don’t miss it!