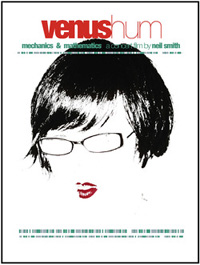 Venus Hum recently released a live DVD that presents an enjoyable cross-section of this excellent band’s music. Filmed in a small club in Cincinnati, Ohio called the Monastery, the Mechanics & Mathematics concert DVD is a real treat.

Until Tony Miracle from Venus Hum mailed me a pre-release copy of this film, I knew that the band existed, but hadn’t paid much attention to their music. My mistake! The live DVD is a great cross-section of Venus Hum’s library of synth-infused music – sort of a “greatest hits” compilation.

Standout tracks featured in this concert film include:

This live performance also features a number of excellent ballads, including Magic Between Us, Tell Me Secrets, The Bells and Bella Luna. 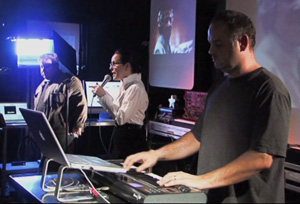 Vocalist Annette Strean empowers the group with a magnetic stage presence as she pours put her heart and soul into the microphone. Dressed in a white blouse, black skirt and wearing black-rimmed glasses with her hair pulled back into a ponytail, she pulls off the sexy geek look perfectly. Her emotive style is perfect for sharing Venus Hum’s colorful vignettes of daily life.

Tony Miracle deftly juggles a synthesizer and lead guitar, which spices up the arrangements of many of Venus Hum’s songs. Finally, Kip Kubin does a great job of backing up Annette and Tony with a bank of synthesizers, a drum machine and other assorted electronics.

According to a behind-the-scenes documentary contained on the DVD, Annette said that she, Tony and Kip created this concert film out of a desire to share Venus Hum’s music with more people. “Just as we connect with each other long distance (Annette is from Montana, Tony from southern California), we’re hoping that we can do the same with our fans, our audience, that we’ll find a way to have a  conversation with them. I think that doing this live show and putting it on a DVD is one of the best ways to do that,” she explained.

The live show was filmed in the same space that Venus Hum used to record much of its latest album, which gave the group a considerable advantage from a production standpoint. “We had control over the whole space, which was a luxury,” Tony indicated. Normally, when a group tours, it must interface its equipment with a different house sound system each night, which can often result in uneven or poorly mixed sound. Not here – every song on the DVD features excellent, crisp production.

In addition, the team that filmed the live concert uses a nice variety of camera angles, giving you an up close and personal look at a Venus Hum performance. As the lead singer, Annette gets a lot of screen time, but you also get a close-up look at what Tony and Kip are doing. Not too much quick-cutting edits of the band, which seems to be very fashionable today in live concert videos. Just an intelligently-presented, up-close look at a very talented group. The look and feel of this DVD is just right; it’s very enjoyable both visually and sonically.

If you have never listened to Venus hum before, this concert DVD is a great introduction to this excellent group. On the other hand, if you are a Venus hum fan, then this DVD is a must add to your collection! The Mechanics & Mathematics live DVD is available from the shop on the group’s website; the cost is US$18, including shipping and handling. The audio of this live performance is also available for purchase from Amazon.com, iTunes and other online music stores.

Here is the official video trailer that the group posted to YouTube – a small sampling of this excellent performance.